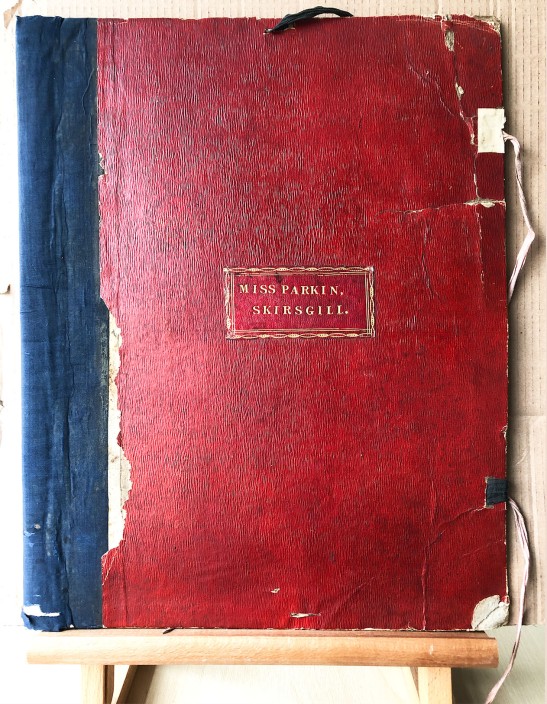 Here we look at the first of three flower drawings from a portfolio within the portfolio that once belonged to Miss Parkin of Skirsgill, Cumbria. This example turns out to have some special relevance for current times.

This is a modest studio watercolour of a red and white striped flower on a sinuous stem with slender leaves, with one side stem tipped by a red bud. It is painted on a sheet of Bristol paper (stamped in the top right-hand corner) and initialled and dated in ink, ‘A B Novr 1818’.

The subject is a red and white striped variegated carnation. This specific variety, essentially a white flower marked with broad red stripes along the petals, appears to have been popular since at least the seventeenth century. It appears in Dutch flower paintings from that time, and seems to have been a favourite of Maria van Oosterwijk (1630-1693) for example in paintings at Cincinnati Art Museum, Denver Art Museum and the Mauritshaus at The Hague. 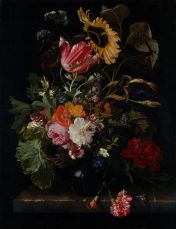 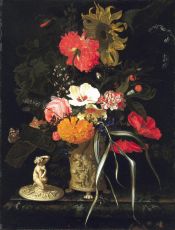 Varieties of it appear in botanical illustrations up to and beyond the date of the present work.

There are numerous modern varieties, but this is very specific, in that the red stripes are very well defined, and run to the edge of the petals without merging to make a fringe. This seems to have been a valued feature in the past but a quick search today shows that most modern varieties are fringed.

One modern variety that has some similarity to that in the present drawing is ‘Montoya’, as seen here in the catalogue of Falcon Farms.

The definitive book on British flower painters is Josephine Walpole’s ‘A History and Dictionary of British Flower Painters 1650-1950. That lists only two candidates that might be identifiable with the initials ‘A.B.’ at this date. One is Anne Frances Byrne (1775-1837). The V&A has a couple of examples of her work, and a further pair was sold at Sotheby’s, New York on January 24, 2020, lot 878. None of these, sadly, bears the least comparison with the present study.

Another candidate might be Lady Anne Maria Barrow (1777 1857) who was born in South Africa and illustrated an album of native flora, now at Museum Africa, Johannesburg. Wikimedia reproduces one specimen of her work: 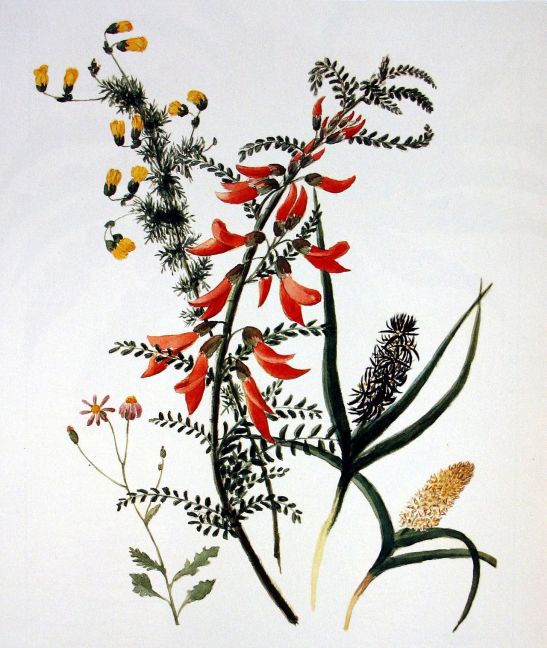 This does stand some comparison with the present work. Lady Barrow settled in England from 1803, but little appears to be known about her subsequent life or work.

It is slightly frustrating that the initials do not lead to a clear identification, so instead we might think about it from the point of view of its owner. What might have been the significance of such a drawing in a young lady’s portfolio?

It seems most likely that it was received as a gift, and might well have had Romantic associations. Sarah Parkin was eighteen in 1818, and gifts of flowers had developed an arcane language of meaning and sentiment. There is a lively short article by Romie Stott on the tradition here:

In short, by the beginning of the nineteenth century, flowers embodied a fully elaborate symbolic language of love. It appears to have been developed first in Rococo France and exported to England. There were several fully-fledged dictionaries of meanings published. The article mentioned above makes the nice point that the system was particularly attractive because of its deniability. Readings were fluid and often contradictory, and could be the occasion of fascinating ambiguity.The variegated carnation had a variety of significance including Refusal, Sorry I Can’t Be With You, Wish I Could Be With You. A nice example of a modern collation/elaboration can be found here:

Whilst Wikipedia says ‘striped (variegated) carnations symbolise regret that a love cannot be shared.’ In a Romantic context, the general sense is of being apart, and of yearning to be together.

Given that a young lady kept this particular drawing lifelong in her portfolio, it seems very likely that Romance was involved. There would have been professional flower artists at this date who would paint specific flowers to be sent between lovers. A young man might very well commission such a missive to express how much it pained him to be separated from the one he loved.

Next, a bouquet of admiration.

One comment on “A Twopeny Portfolio: #22 Red and White Striped Carnation, 1818.”