My friends tell me that it’s not real work, not proper research; all this trotting off to places Turner might have been. It’s a bit like Richard Long expecting to make a living out of walking and camping holidays. My unappreciative chums may have a point, but I want to argue here that ‘real’ work is constituted in acquiescence to a system most often blinded to everything but what it thinks it wants. In receiving service contrary to its demands then it  might it be given a glimpse of a less predetermined destination.

In his book, The Truth in Painting, Jacques Derrida develops the idea of the parergon (note 1). His discussion spreads across one hundred and twenty eight pages of extremely demanding reading. In a nutshell [if that’s at all possible] ‘Parergon’ means ‘by-work’ (Greek: ‘Ergon’ = work; ‘Para’ = besides; by). Derrida develops a conceptual model in which meanings (= the work)  are constantly renegotiated by their context. In philosophical terms he shows that any meaning is always constructed in historical social circumstances, but cannot remain stable since such systems are de facto always in process of dynamic change. The work belongs to the system, and the parergon belongs to the process of change. Derrida is reading the work of the philosopher Immanuel Kant,  and finding that his mindset is constructed by a particular 18th century system. Derrida discovers a succession of cases in which Kant’s concepts come under pressure from the context (note 2). Another, more literal sense of ‘by-work’, not Derrida’s subject, and now not in general use, is that of a work that is subsidiary to one’s ordinary employment. In this case, I think, the two senses might be productively related.

At the end of September I took a short trip to Arnside in southern Cumbria. I’d never been there before, but Turner had. He visited the area in 1816 on his tour of the north of England. 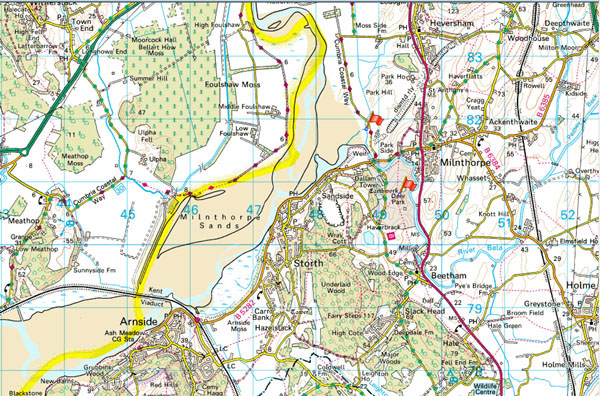 I published most of his sketches and watercolours in my 1984 book  In Turner’s Footsteps, and visited every site that he visited, with one exception. Passing from Kendal towards the northern shore of Morecambe Bay, Turner made a southerly detour to Dallam Tower, the early 18th century seat of the Wilson family near the town of Milnthorpe. I discussed the site in the book (note 3), but on my tour, for reasons that now elude me, I managed to by-pass it.  So now, between departmental meetings and setting up modules for the new semester, I found a couple of days, booked myself into Arnside Youth Hostel, and resolved to fill in the missing section.

Arnside Youth Hostel is a real treasure (note 4): A big old stone school house covered in red Virginia creeper; more than slightly tatty; full of creaky bunk-beds and extraordinary people. A cyclist who had come from Skipton that day, and the next morning was heading for the high Lakeland passes. Remarkable enough, but especially so in that this was accomplished with one arm. A retired school teacher who was drawn to Arnside several times a year over more than sixty years as a YHA member. Arnside itself with its dainty Edwardian verandas facing the Kent sands, and trains periodically rattling across the viaduct to Grange. The Arnside and Silverdale area of outstanding natural beauty, criss-crossed by paths, including the ‘Fairy Steps’ on the walk from Arnside to Dallam. A steep cleft up a limestone crag. It is lucky, apparently, to ascend without touching the sides, but as I discovered, this is only possible for fairies and four-year olds. Art historians may become wedged. But I digress…

To view this image in the online catalogue of the Turner Bequest at Tate Britain (note 5). Follow the link below and the click on your browser’s ‘back’ button to return to this page: http://www.tate.org.uk/search/D11595

Dallam Tower was Turner’s proper work in 1816. The purpose of the tour was to fulfil a commission to make two hundred watercolours of subjects in the north of England. These had been selected by a committee of gentlemen to illustrate a multi-volume ‘General History of the County of York’ (note 6). Perhaps one of these gentlemen was Rear Admiral George Wilson of Dallam. It is the kind of country-house subject that was well established as a type of art and during the previous twenty years Turner had made many examples of this kind. He generally always liked to get an overview of his subject so he found the most elevated point of the deer-park from where he could survey the house in relation to the estuary with the limestone crag of Whitbarrow Scar on the far side and the high Lakeland fells towards Coniston Old Man in the far distance. It is surprising just how unchanged is the scene: At the top of the slope to the right are the stumps of Scots Pines that Turner saw there, and the park is dotted with large oaks, many of which must be the same specimens as were growing there then. He made one of his most careful and expansive sketches, and obviously laid down the basis for what would have been a splendid picture. The proposed finished work was a casualty of the curtailment of the project. He did manage to complete a few watercolours that were published later, but here is no record of any picture of Dallam. But then, unrecorded Turners still surface quite regularly…

In Turner’s Footsteps fixes the time of day as afternoon: Low tide was at about 3.30 p.m. and the Kent can be seen snaking across the sands. Having taken care of the required work he wandered down to the shore. The path leads out of Dallam Park to a bridge over the river Bela where a view of the estuary opens out. Turner followed a path northwards to the right. The modern path follows the top of a large dyke to reclaim land from the marshes, and it offers superb views all around. There is nothing here but space, sky, air, gulls, dog-walkers, and encompassing light. Turner found himself in a space undefined, exploring on his own account, outside of the demands of the task and in a type of landscape that figuration had not yet recognised, let alone knew how to require.

To view this image in the online catalogue of the Turner Bequest at Tate Britain follow the link below. Click on your browser’s ‘back’ button to return to this page: http://www.tate.org.uk/search/d11500

Half a mile or so beyond the bridge towards Levens he stopped and took stock of the panorama. He had no particular requirement to draw the subject, and certainly not in his best manner, but still felt impelled to set down some memorandum of the situation. He had used his largest and best sketchbook for recording Dallam Tower but here he chose a smaller sketchbook. Its 5 x 8 ins (12.5 x 20.6 cm) pages offered a panoramic format appropriate to the space. He started with the main sketch in the centre looking north-west to Whitbarrow Scar marked by a ‘W’, no doubt to indicate its conspicuous exposure of white limestone. To the left are the high peaks of the Coniston Old Man group and to the right (from left to right) the peaks of Fairfield, Kirkstone Fell and the High Street group, all approaching 20 miles distant. To the right is a squat tower, possibly a lighthouse, and on the sands in the foreground are figures, possibly gathering cockles – still an important activity. That done, he continued with a second sketch on the same page, above, to pan round to the south-west and record the view across Milnthorpe Sands towards the mouth of the Kent, with Arnside Knott in the distance to the left, and the fells above Grange and Lindale towards the right. In the far distance a couple of ships can be seen moored off Sandside. Surprising as it may seem today, Sandside was once an important quay. It had the honour of being the only significant port in the county of Westmorland, and served Kendal and the southern Lakes. Coal and manufactured goods came in and cloth, stone and other produce shipped out. The estuary was also a significant site of shipbuilding, and vessels from here plied around the shores of the Atlantic and all across the northern seas (note 7)

It is a wonderful situation, more notable now for seeming bypassed by the events of the world, and its principal characteristics are those of emptiness and space. Even in 1816 there was nothing in this as a subject that would have provided any interest to the viewer. Yet it is a place into which the imagination can learn to expand without limit or constraint, unconcerned by the exigencies of business. The qualities of such a space might began to register with an alert imagination such as Turner’s, but there was no frame in wider consciousness in which it could be construed. Even Turner had not yet the recognition of it to make it a subject in itself. Yet in the space between the prescribed tasks, his by-work was engaging with emergent possibility. It was to be fourteen years before this kind of subject sufficiently coalesced in Turner’s practice for him to be able to bring a major statement of it before the public. Then it was a different country, but a similar environment, that provided the subject for the painting Calais Sands, exhibited at the Royal Academy in 1830.

This painting is online as part of the Public Catalogue Foundation hosted by the BBC ‘Your Paintings’. The site offers an extended commentary and an enlargable image. Follow the link below and click your browser’s b’back’ button to return to this site:

The parergon now began to emerge as a work in itself, albeit falteringly. The picture was not much noticed, but one critic, although troubled by its emptiness, did acknowledge a strange aesthetic power: ‘it is literally nothing in labour, but extraordinary in art’ (note 8). Perhaps consciousness was not yet able to see it as unproblematic. The picture did not find a buyer for another fourteen years, and even then the purchaser formed no great attachment to it and moved it on through a few collections without it finding a long-tem home (note 9). Its last private owner was Bury paper-maker Thomas Wrigley who enjoyed it for only eight years up to his death in 1880 after which in 1897 his children made a founding gift of his collection to Bury Art Gallery. Time has steadily clarified its importance. It is now one the star of Bury’s collections and one of Turner’s most internationally admired compositions.

When Turner entered that kind of space on the banks of the river Kent in 1816 it was non-descript. His engagement with the place was superfluous and unrequired, but Turner always allowed the by-work to occupy him as much as the work, and therein found material with which to challenge and refocus the pre-required. Truancy turns out to be work after all, at least when done so attentively.

There is always something to be listened for in the by-work. Walking to Dallam amply justified a visit to the Arnside Chip Shop and afterwards ‘The Albion’. Sitting by the old coastguard station on the way back to the hostel, it fell dark. The lights of Grange came out one by one, reflected in pockets of water. About twenty minutes later quiet turned to commotion, as if a storm had suddenly blown in. It was too dark to see the cause as the reflections turned to black. Only eventually did we begin to connect this with the phenomenon known as the Arnside bore. When the tide turns on Morecambe Bay, it gathers into a wave that pours into the creek. In this instance it was all the more striking for sweeping by so unexpectedly in the dark. When it passed we were left with stunned silence, and early autumn leaves shaken from the trees.