This is the sixth instalment of a journey of exploration starting from a 1636 Rembrandt etching, Self Portrait with Saskia. Here we hear of their engagement and wedding.

By 1633 Rembrandt, working under Hendrick Uylenburgh’s management and in his house on the Breestraat, was quite the brightest star in the Amsterdam firmament. Commissions poured in and Rembrandt responded with one masterpiece after another. Nonetheless, as is all too frequently the case, even for those with real gifts, there is room for self-doubt, introspection and anxiety. In a succession of self-portraits Rembrandt paused to look askance at himself, and to wonder who and what he might be, where it might all be trending, and most worryingly, whether any of it might have any real value. Almost always his own reflection suggests that his role is at best being moulded from ordinary human clay, and at worst guilty of imposterism and in a state of panic. In a self-portrait etching of 1633 the shade over his eyes contrives merely to accentuate the sense of anxiety, rather than to mask it.

To see the image in the museum’s online catalogue click here.

My Dutch is almost non-existent, but this might be given as: ‘This is a portrait of my housewife/ who is 21 years old [taken] on the third/ Day after our betrothal/ 8th June/ 1633’

I think we should let Simon Schama [‘Rembrandt’s Eyes’, p.365] describe the drawing for us;
Saskia’s face and upper body are caught in a fresh, early summer light. She sits at a table, her elbow resting on an inclined surface that looks much like an artist’s sketching support, leaning forward toward he betrothed, self-consciously the love object. Her features are lightly but exactly described, as if by fingertip exploration. Intimate details are quickly traced with the attentiveness of a lover carefully registering an inventory of small treasures: a wisp of hair lying against her right cheek; the puppy-fat folds at the throat circled by a pearl necklace..; the slight rise of bone at the tip off he retroussé nose; the gathered fabric of her blouse, filled with the bosom that rests on her right arm; the faint pressure of her tapered index finger against her left cheekbone, the underside of her thumb propping up he head. And at the centre, dramatized by the dashing sweep of the wide-brimmed straw hat, is Saskia’s heart-shaped face with its faintly snob nose; its Cupid’s-bow mount, the shaded join between the upper and slightly drooping lower lip exactly described, sketched; and its almond-shaped eyes, amused, flattered, good-humoredly tolerating the examination. Flowers encircle the crown of her hat; another is held by the stalk, its head drooping slightly. She is his bloom, a child of nature, the Frisian meadow girl, the bringer of springtime fertility, bright and dewy. Dit is near mijn huysvrou geconterfeyt do sy 21 jaer oud was den derden dach als wij getroudt waeren den 8 Junijus 1633’… readshis inscription. But it seems less a statement of possession than of amazed declaration. See this. This schatje, this precious little piece of work; she is my wife-to-be, my great good fortune’.

It is almost as if Rembrandt had to write the fact down in order to begin to process it. What is clear to sense is that staring into Saskia’s face melted away every scratch of self-doubt and anxiety that had written itself into his self-portrait. He seems to be looking at no less than his salvation.

Betrothal was a serious business and a social contract. It involved family, inquisitions into property, prospects and propriety. Recent research by Ben Broos into the betrothal of Rembrandt and Saskia has established that it took place at a significant gathering of the Uylenburgh clan in Sint Annaparochie. The occasion was the baptism on 2 June 1633 of the third child of sister Hiskia and her husband, Gerrit van Loo. The little girl was named Sophia in the presence, as was customary, of a gathering of the wider family. Rembrandt presumably waited until the family festivities were concluded, and was then invited to present himself for examination. Questions would have been asked, perhaps even suspicions harboured, but the inquisition seems to have proved satisfactory, for on 5th June, by inference from the inscription on the portrait, their betrothal was sealed. 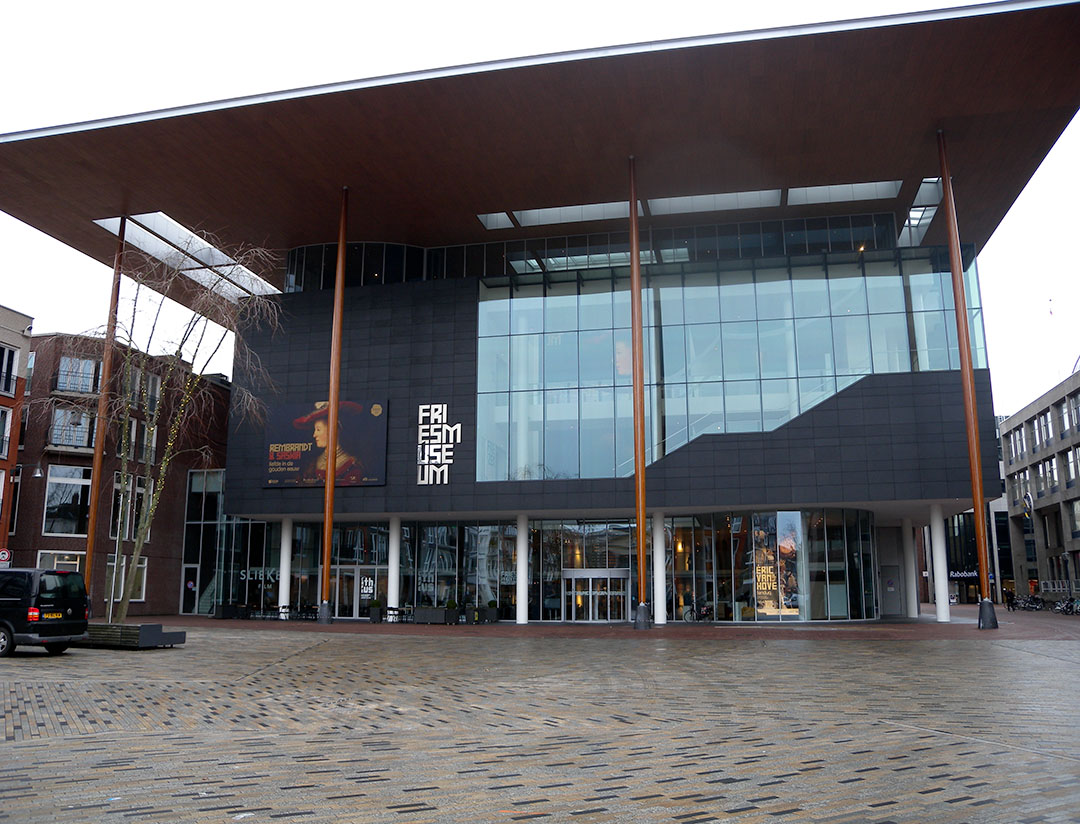 The exhibition at the Fries Museum, Leeuwarden of ‘Rembrandt & Saskia: Love and Marriage in the Dutch Golden Age’, illustrates how serious a business this all was.

I found the whole thing fascinating, but a few things stick in my memory. In particular the betrothal hearts that open and close the exhibition. In Rembrandt and Saskia’s day it was common for a (presumably well-connected) suitor to present his intended with something like this. Often they contained a special small gift or message, and subsequently hung over the marital bed. Rembrandt would certainly have known craftsmen that specialised in such objects. 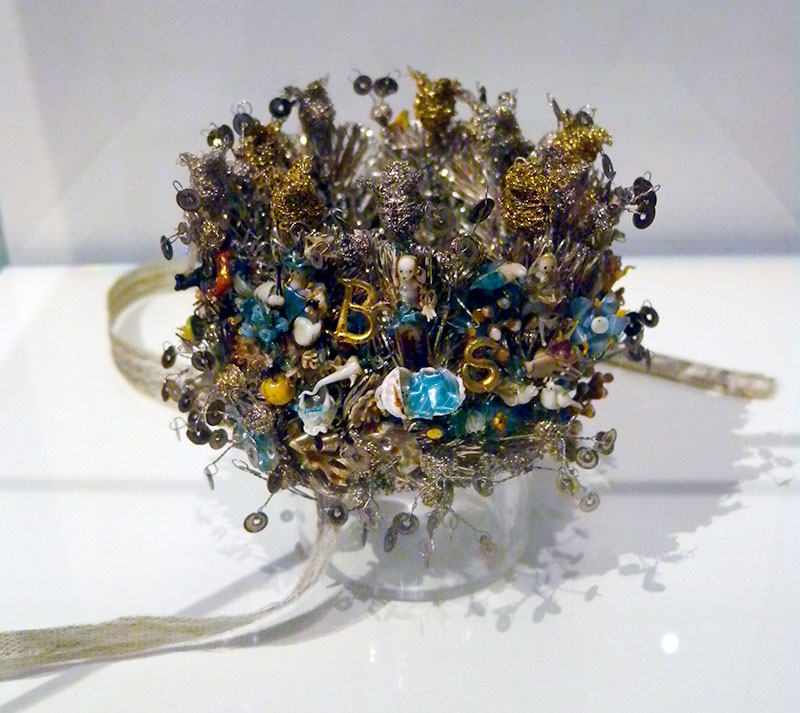 I also especially liked the mid-century bridal crown from the Amsterdam museum. One can certainly imagine Saskia wearing something like this at her own wedding.

Rembrandt had a whole year to wait after the betrothal in June 1633 before their wedding in June 1634. The portrait drawing must have been kept prominent in his apartments so that he could reflect on his pledge, and keep he picture bright in his mind. Amidst his many commissions he found time to bring her image to life on his easel. One of the principal products of this period is a splendid portrait at the Rijksmuseum.

The latter version is currently attributed to Govert Flink, I have no doubt for good reason. But I do have to say that seeing in the exhibition at Leeuwarden, next to an undoubted Self-Portrait of Rembrandt from the Burrell collection in Glasgow

I could see no obvious qualitative reason to doubt an attribution to Rembrandt. In fact quite the reverse; it is quite one of the best pictures in the whole exhibition.

During the year between their betrothal and the wedding ceremony, there was legal business to sort out with regard to Saskia’s share of the family inheritance. Saskia went to help out in Frankener when her sister died suddenly and left her husband, Professor of Theology Johnannes Maccovius, bereft with a young son. Her presence in the household might not have been altogether proper, were it not for the fact that she was publicly betrothed to Rembrandt. The artist also had arrangements to make. There were formalities to observe with church and law, and also with his own family. 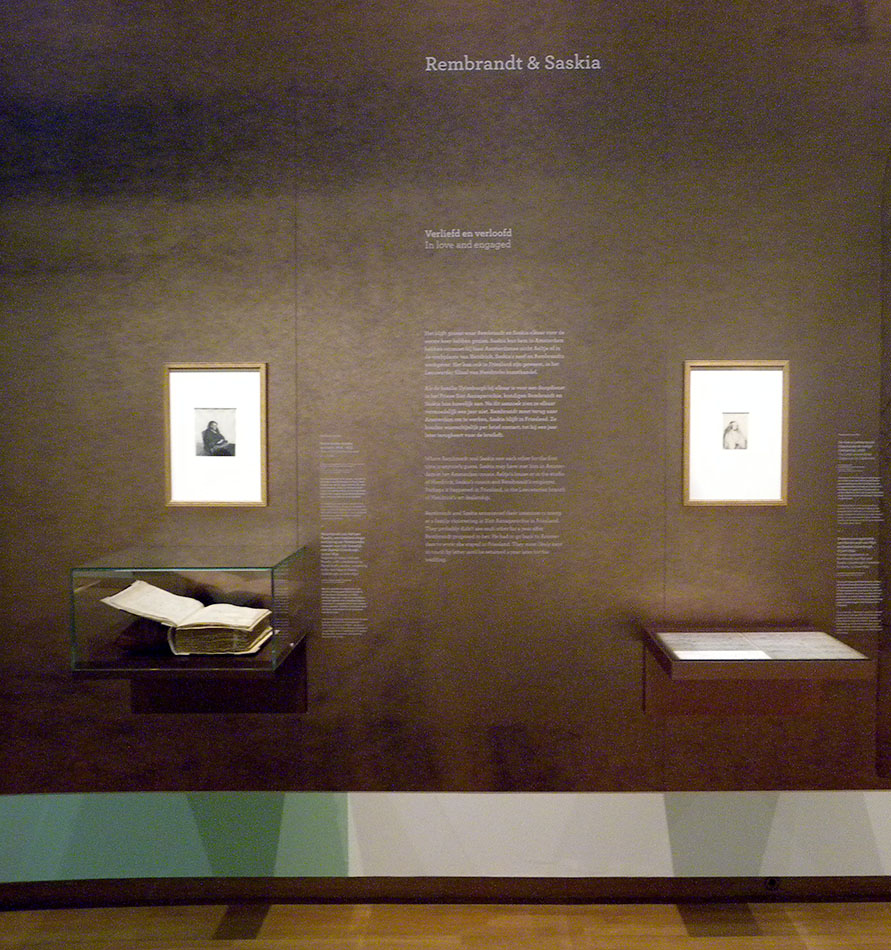 One particularly thought-provoking exhibit at Leeuuwarden, was a document from the archives at Leiden. It was bound in a large vellum volume displayed in a a case beneath a portrait of Rembrandt’s mother, and records her giving formal permission for her son to marry. It was something of a surprise to me to learn that this was quite normal at this time, even well after the usual age of majority. The document certainly underlines the importance of marriage as a social political contract in this age. Accordingly within a few days of the artist going to register his legal intentions in Amsterdam, his mother went to a notary in Leiden to have a formal document drawn up of her consent. 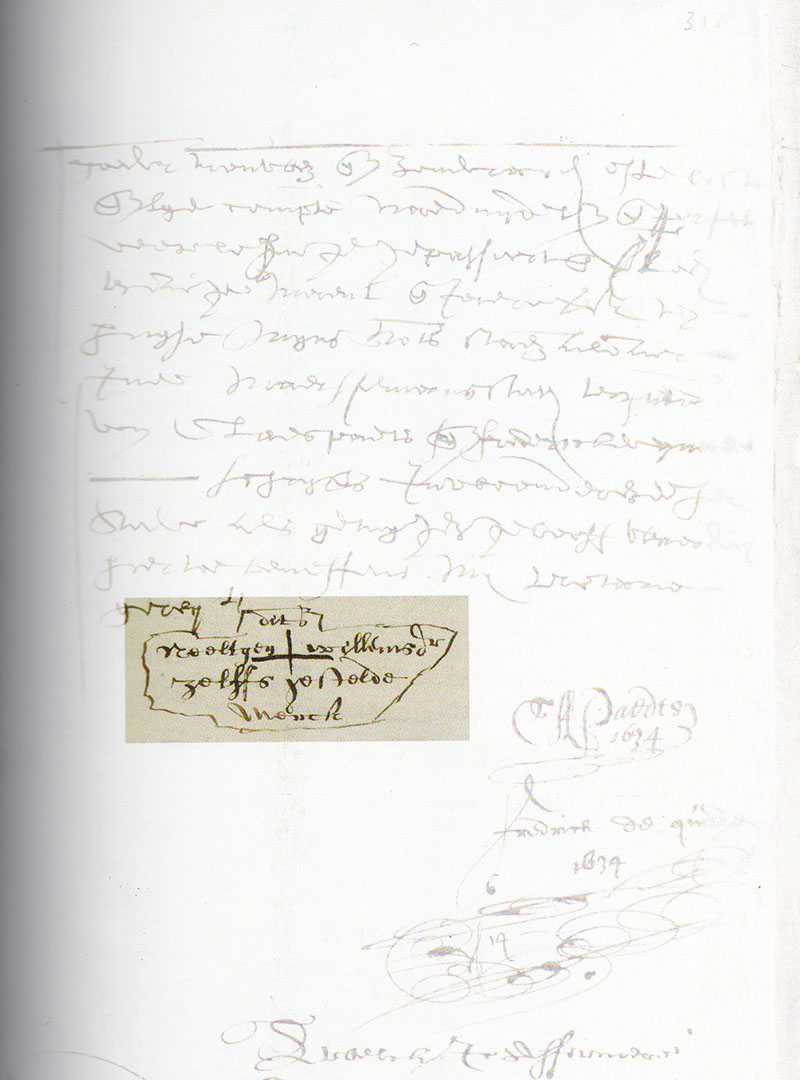 Today, 14 June 1634, before me, Adriaen Paedts, notary public, and the witnesses mentioned below, appeared the Hon. Neeltgen willemsdr. van zuijtbrouck, widow and legatee of the property of Harman Gerritsz van Rhijn, citizin of this city, well-know to me, the notary, and declared that she has voluntarily given her consents, permits, and does by this [instrument] – for her son, the Hon. Mr. Rembrandt Harmansz van Rhijn, painter to marry the Hon. Saskia v. Uylenburch, a young maiden from Lieuwerden in Vrieslant. And [Rembrandt], who for this purpose has made known and announced his wedding banns at the appropriate place and which meets with his approval, will subsequently proceed with the civil marriage and its solemninzation.
Assisted by her son, Adriaen Harmansz van Rhijn, the guardian chosen for this purpose, the deponent promise to fulfull, live up to, and sustain her consent and permission at all times according to law.
Furthermore, she hereby declares to give her irrevocable consent and approval of her aformentioned son Rembrant van Rhijn’s registration and announcement of his marriage without evidence of her consent with the Commissioners of Marital Affairs in Amsterdam, which pleaser her immensely.
On account of this, the deponent expresses her thanks to the Hon. Commississioners and begs them to treat her voluntary consent with equal weight, as if she were present personally.
And she has requested me, the notary, to draw up and deliver a formal document of this so that it can be used whenever required.
All this was done and transpired in good faith and without malice. Enacted and passed after it had been read clearly and entirely to the deponent, on the day, month and year mentioned above, at my, the notary’s, house, located her in Maerssemanssteech, in the presinhabitants of this city, as reliable witnesses requested herefore apart frome me, the notary. this is the mark made by Neeltgen Willemsdr. herself.
C.A. Paedts, 1634
Frederick de Quade, 1634
what I confirm:
A. Paedts, notary public signed.
[in the upper left margin] this document has been transcribed formally

It is interesting that she could not write. The document says that it was read to the deponent, and she signed it with a mark that had to be witnessed by the notary. These were very different families, the van Rijns and the Uylenburghs. The millers and bakers from Leiden were of the tradesmen’s stock; the Uylenburgh literate, Latin-educated, lawyers and burghers. Rembrandt was transcending a social divide. Through his own Latin education and cultural investment, he was the living representative of new possibilities of social mobility. To put it in academic terms he had learned to operate, even excel, in the cultural discourse of the established classes.

With the formal preparations completed, events progressed apace, and on 2 July the Uylenburgh clan assembled again in Sint Annaparochie, to walk with Rembrandt and Saskia to the little church and witness the wedding ceremony. None of Rembrandt’s family appear to have been present. 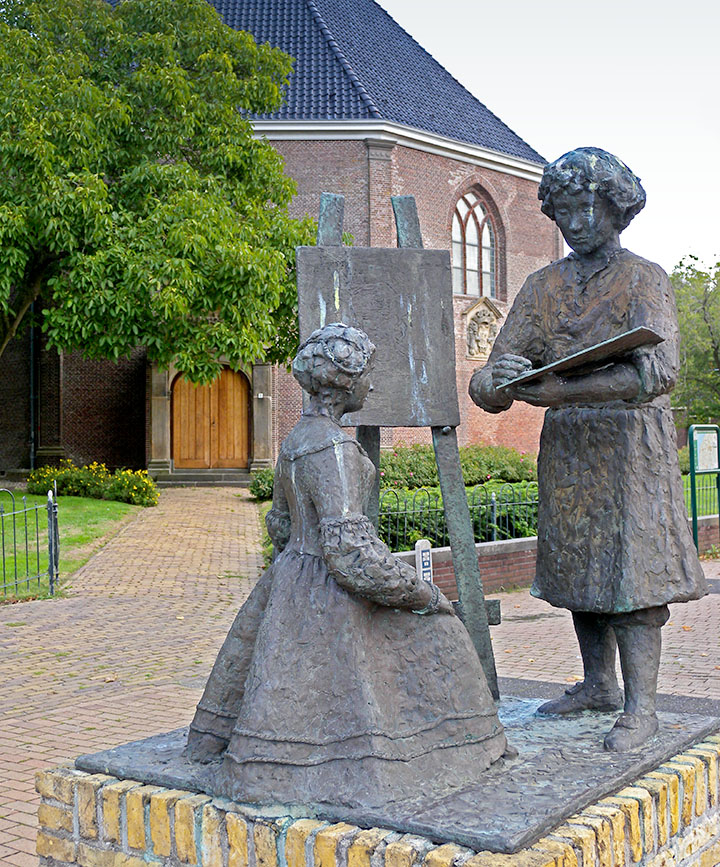 The sculpture of Rembrandt and Saskia outside the church at Sint Annaparochie does the pleasant service of giving them a tangible presence in the place. But it is sentimental and naïve in a manner far removed from the considerations the were really at play in their marriage. Saskia was indeed special. In marrying her, Rembrandt publically secured a position in cultured, literary and established society. He would soon have served his three years as an Amsterdam resident and could join the guild. He might still have carried some shadow of his background about him, but he would at least have a decent platform on which to build his reputation. It must have seemed to him as if he had at last entered upon his hard-earned estate.

I’m away now for a short while, so this is perhaps a good opportunity to let Rembrandt and his bride enjoy their married life together in peace. We will consider the etching of Self Portrait with Saskia in the light of all this upon my return..