In Ruskin’s Footsteps: the Balconies of Bellinzona

In November 2012 I made a short site visit to the southern Swiss town of Bellinzona. It stands at the entrance to the Ticino valley above Locarno and for centuries served as the southern gateway to the St Gotthard Pass, controlling traffic between northern Italy, especially Lago Maggiore, Milan and Turin, and northern Switzerland including Lucerne and Zurich.

Its castles and bridge provided both Turner and Ruskin with numerous subjects, more of which I hope to illustrate through photographs in future articles, but for the present I want to concentrate on some incidental details that not only proved to be more readily identifiable that I anticipated, but also indicative of Ruskin’s attenuated alertness to quality in artistic expression. 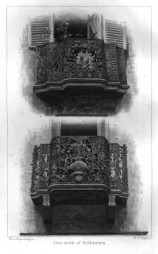 John Ruskin Balconies in the Piazza Collegiata, Bellinzona, 1858: Two daguerreotypes taken for Ruskin by Frederick Crawley, reproduced as the frontispiece to his lecture ‘The Two Paths’, published 1859. Image from the Library Edition of The Works of John Ruskin 1903-1912.

Balcony on a house in the Piazza Collegiata, Bellinzona This house is just to the right of the church Photograph by David Hill taken 1 November 2012, about 2.00 pm. 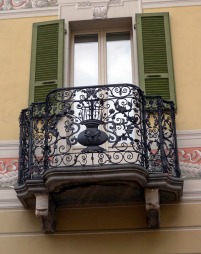 Balcony on a house in the Piazza Collegiata, Bellinzona This house is at the north end of the west side of the Piazza. Photograph by David Hill taken 1 November 2012, about 2.00 pm.

Ruskin noticed these wrought-iron balconies during a visit to Bellinzona in 1858. He had them photographed by his assistant Frederick Crawley using the daguerreotype method, and the following year published the images as a frontispiece to his lecture ‘The Two Paths’. The lecture included an illustrated discussion of their quality of craftsmanship and the spirit of that time, which put C19 manufacture to shame. The original daguerreotype plate of the upper image survives in the Ruskin Library at the University of Lancaster. That for the lower image is presently untraced unless it forms part of an extensive private collection of Ruskin daguerreotypes belonging to K&J Jacobson. That collection is soon to be fully published. 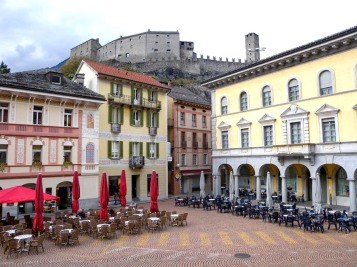 Piazza Collegiata, Bellinzona, from the steps of the Collegiata, with the Castel Grande in the background Photograph by David Hill taken 1 November 2012, about 2.00 pm. Ruskin’s balcony can be seen (left) on the house just left of centre. The square was quiet being All Saints Day, but the following day was thronged with people.

The Collegiata, Bellinzona, looking north. Photograph by David Hill taken 1 November 2012 approx 2.00 pm Ruskin’s Balcony can be seen on the house to the right of the Collegiata.

The actual balconies are here identified with the photographs for the first time. The upper balcony in Ruskin’s illustration is on a house immediately to the south of the Collegiata, and the lower is on a house on the west side of the northern angle of the Piazza. Both images may be presumed to be reversed in the daguerreotypes, but there is too much symmetry in the pattern to be entirely certain. Ruskin also took a separate photograph of the lower balcony as seen from a side angle, and the original plate of that survives in the Ruskin Library, University of Lancaster. ‘The Two Paths’ also includes several engravings to support Ruskin’s discussion of the extraordinary attention to detail in the balconies. These were evidently taken from drawings in a notebook of 1858, including one of an oblique view, reproduced below.

John Ruskin, Balcony in the Piazza Collegiata, 1859. An engraving published to illustrate Ruskin’s lecture ‘The Two Paths’, published in 1859. Image from the Library Edition of The Works of John Ruskin 1903-1912

There is a further daguerreotype at the Ruskin Library of a balcony at Bellinzona. This was catalogued as ‘An Arcade at Bellinzona’. Close inspection, however reveals that the image is reversed (normal in a daguerreotype), and that the street sign to the right reads ‘Piazza Nosetto’. This enables the subject to be here identified for the first time as the entrance to the courtyard of the Old Palazzo Civico in Bellinzona. The building was demolished in 1924 and replaced by the present building, although from the evidence of this photograph the columns and capitals were retained. The balcony of the new building is a much more elaborate Venetian affair, but it is seems probable that the original high quality wrought iron balcony was preserved somewhere.

For all those that have passed through these squares, very few have noticed these balconies as did Ruskin. His drawing requires quite a peculiar station, tucked in the angle of the adjacent house, but only here is it possible to see the projecting nature of the relief. In adopting such a position, Ruskin is revealing himself to be someone of unusual, even eccentric, perceptivity. It might be fairly said that visitors to this square generally have more obvious occupation – companions, business, or recuperation – and the excellence of wrought-iron balconies makes little claim to consideration. But Ruskin was not of any ordinary consciousness and his underlying argument was that normal business dimmed the senses of those with a mind for finer perceptions. There was once a time he fancied when finer standards prevailed. But all he saw now was a contemporary culture blind to everything but its own business.

This entry was posted on September 29, 2014 by Professor David Hill in Ruskin and tagged Alps, Bellinzona, Daguerreotype, John Ruskin, Switzerland.