I am fortunate to have been appointed to work through the whole collection of over eight hundred drawings by Cotman at Leeds Art Gallery. This will be a three-year project funded by the Esmée Fairbairn Foundation culminating in 2017-18 in an online catalogue and an exhibition. 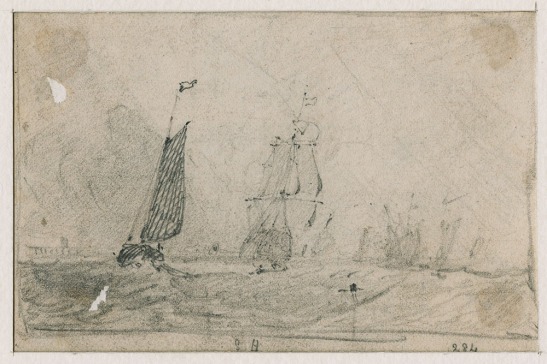 J.M.W.Turner RA
Helvoetsluys : the City of Utrecht, 64, going to Sea, exhibited Royal Academy, 1832 no.284
Oil on canvas, 914 x 1220 mm, 36 x 48 ins
Fuji Art Museum, Tokyo, Japan
Image courtesy of Fuji Art Museum
To see this image on the Fiji Art Museum’s own website, click on the following link, and then use your browser’s ‘back’ button to return to this page:
http://www.fujibi.or.jp/en/our-collection/profile-of-works.html?work_id=428
Click on image to enlarge.

The Leeds Collection of Cotman comprises principally of a very large collection of drawings from Cotman’s sketchbooks that were collected by Leeds architect Sydney Kitson in the 1920s, and bequeathed to Leeds on his death in 1937. Kitson devoted his retirement to the study of Cotman [and I empathise entirely with that!] and compiled a superb first catalogue of his purchases. In the near eighty years since his death, however, no-one has ever attempted to systematically build upon his beginnings. The particular importance of the Leeds collection is that it comprises so much of drawings from his sketchbooks. At some stage Cotman dismembered his sketchbooks and mounted their contents in groups of a dozen or more drawings on large sheets of cartridge paper. That is the form in which Kitson bought them, but he remounted them all in his own watercolour paper mounts, and that is the form in which they survive today. Now, working with Theodore Wilkins, curator of Prints and Drawings at Leeds, and a team of volunteers, and specialists in conservation, paper and archival cataloguing I have begun to work my way through this treasure trove. Using Kitson’s notes it is possible to work out original groupings and associations, and every day brings new identifications and discoveries. We believe that the Leeds drawings will prove to be of foundational importance to the study of Cotman, and that the project will spur a complete catalogue raisonnée of Cotman’s oeuvre, working in association with the other major collections.

As a Norfolk man, Cotman had a lifelong interest in everything maritime and riverine, and the Leeds collection is rich in sketches of ships and boats. I started with these, and have perforce immersed myself in a whole new language of yawls and ketches, Galliots, Pincks, cutters, gaffers, luggers, barques, brigantines and barges. Cotman recorded every variety in every situation. He owned a boat and made sailing tours with his sons down the Suffolk and Essex coast as far as the Thames, the Port of London and the Medway. There are the best part of three hundred drawings of boats, all interesting in themselves, all superb in draftsmanship, some making significant association with other works. Some document Cotman’s observations, others his artistic imagination and some his constant interest in what other artists were doing. Here I offer one particularly interesting instance of the latter.

At the centre of the composition is a man of war ship in full sail seen from the stern. To the left is a single-masted, gaff-rigged fishing boat sailing away on a port broad reach. In the left distance is a pier, and to the right a number of smaller vessels, probably fishing boats. Conditions are: fresh with a choppy but not rough sea, excellent for sailing. The subject surrounded by a freehand framing line.

The drawing is one of perhaps two thousand pencil drawings mounted by Cotman on large sheets sometime after 1820 and by descent to the ‘Highly important sale by auction of a rare and valuable collection of works of art, by the following artists: John Sell Cotman, Miles Edmund Cotman, Varley, Sillett, Hobart, and Teniers, Pritchett, Hannah, S D Colkett, Nursey, and others..’ at Murrell’s Bazaar salerooms, Norwich, 26-27 November 1862, where bought King and thus to Boswell’s, Norwich, where bought Sept 1926 by Sydney Kitson (died 1937) and by whom bequeathed to Leeds City Art Gallery and accessioned 1949.

Kitson first described this drawing in a notebook of his 1926 purchases that is preserved with the Leeds collection. He called it ‘Brig in centre middle distance – 1 masted boat l with dark sea l. foreground – Jetty left. Boats in distance right’. In a list of his complete collection compiled about 1937 he revised this to ‘Shipping off Yarmouth’, and this has been followed by cataloguers ever since. It can here be identified, however, as a study of Turner’s painting ‘Helvoetsluys : the City of Utrecht, 64, going to Sea’, exhibited at the Royal Academy in 1832 no.284, (now Tokyo, Fuji Art Museum). Cotman inscribed the catalogue number at the lower right and at the lower centre ‘S H’ for ‘Somerset House’, then the home of the Royal Academy.

Cotman records the general elements of Turner’s picture, but the details vary throughout. We may surmise that it was made from memory rather than direct from the painting, which would not have been allowed. In many ways the study makes the more dynamic composition: The foreground boat cuts the space more dramatically, the sail is larger and silhouetted, and the treatment of space is altogether tighter. On the other hand, this rather misses the way in which Turner injects a sense of space and circumstantiality into his picture to give a heightened sense of realism.

At the exhibition of 1832 Turner’s picture was the occasion of some friendly rivalry between himself and John Constable.’Helvoetsluys’ was hung next to Constable’s ‘Opening of Waterloo Bridge’. It is recorded that Constable worked hard on his predominantly red and gold picture whilst on the wall prior to the opening of the exhibition,. At the last minute Turner added some vermillion to a buoy in the foreground of his mostly grey picture, and immediately made the Constable look over-wrought. Cotman would certainly have appreciated Turner’s economy of colour and under-statement. Constable said ruefully: ‘Turner has been here and fired a gun’.

The Leeds Collection contains several energetic studies of marine pictures. Some (eg 1949.075 and 1949.073) are extremely loose and rapid and in comparison this seems comparatively steady and solid, more ‘maniered’. The rubbing out of tone with the finger – especially in the sky to the left – is noteworthy. Many of the Leeds works are physically small, but their artistic quality is huge. One aspect of this project is to photograph the drawings at such resolution as to enable the catalogue user to enter into them so far as for them to fill the imagination as they did for their artist.