This post continues the essay begun on 19 October 2015 and continued on 18 November 2015, and 20 November 2015. In part #1, I followed in the footsteps of Turner’s comprehensive exploration of Heidelberg in 1833. In part #2, I looked at a major finished watercolour that he developed in the early 1840s, and a return visit to Heidelberg at the same time. In part #3 I looked at the deepening sublimity of his treatment of the site in three colour studies and a second major watercolour of c.1842. Here I retrace his last visit to Heidelberg in 1844 when he made some new pencil sketches and a wonderful series of colour studies. We know the exact dates of this visit, 24-27 August, so that was my cue for following in Turner’s footsteps on exactly the same dates in 2015.

The occasion of Turner’s 1844 visit to Heidelberg was an extremely wet summer. He spent a few weeks in the Alps around Lucerne and Grindelwald, but was prevented by the weather from crossing any of the high passes south. Eventually, as he said, he gave up, headed back north to the Rhine, got his boots heeled and soled, and spent a few weeks exploring the side valleys, of the Rhine, particularly the Nahe and the Neckar, and much to his delight. Apart from the dates of his stay in Heidelberg, we also know he stayed at the Prinz Carl in the Cornmarket, and a few sketches of the Karlstor, in the On the Neckar sketchbook (Tate, Turner Bequest TB CCCII) , stand at the outset of a walking tour up to Heilbronn and back and the sketchbook is full of animated pencil sketches of Neckar Castles. By this time Turner was also in the habit recording his tours in long series of colour sketches. That of 1844 is no exception and the pencil sketches of the Neckar are accompanied by numerous watercolour studies. It would be wonderful to explore those in Turner’s footsteps but in August I had time only to focus on Heidelberg, and to treat the Neckar in the detail it deserves would be an undertaking of book length.

He was prolific enough in his few days in Heidelberg. His main sequence of pencil sketches is in the CCXCVII Spires & Heidelberg sketchbook. This begins with one fine and composed sketch at Lucerne, but the main sequence consists of very scrappy and mostly unidentified buildings amongst mountains and lakes, presumably in Switzerland. The scrappiness speaks very much of not being unsettled by the weather, and he left several blank pages, which he filled once he retreated north to Heidelberg (and Speyer, which is on the Rhine south of Heidelberg). There is a clutch of sketches of Heidelberg castle from the east and north terrace in the middle of the book, interleaved with drawings of Lucerne. It has to be said that even at Heidelberg Turner’s sketches are rapid and impressionistic, and not at all considered or relaxed. Their style very strongly suggests that he now felt that sketching in pencil was not the primary product of his touring. It was the antenna through which he could derive his sense of a site, but the important work of assimilation was now being invested in colour studies.

His Spires and Heidelberg sketches are exclusively confined to the castle and mostly to the gardens to the east, or the north terrace. His principal interest appears to have been in finding some way of representing the castle by sunset. One sketch (13) from the garden terrace actually shows the sun in the sky, and another from the north terrace (18a) is inscribed ‘the last gleam of sun’.

The major product of Turner’s 1844 stay in Heidelberg was a series of nine colour studies. These originally belonged to a ‘roll’ sketchbook (i.e. one with paper covers that could be rolled up for carrying). Turner used such sketchbooks a great deal in his later career, principally for colour studies. This particular sketchbook is called the ‘Heidelberg’ sketchbook, and was still intact after Turner’s death when it came to the nation as part of the Turner Bequest. Ruskin noted that it was a sketchbook of 24 coloured sketches, including ten of Heidelberg. Sometime afterwards Ruskin mounted many of the best pages for exhibition, but somewhere in that process the original pagination of the book was lost. There are still ten sketches of Heidelberg if we count one that is in pencil on the back of one of the coloured sketches. The book was also used for colour sketches of subjects on the river Neckar, made on a pedestrian tour up to Heilbronn, and also for sketches on the river Nahe, which Turner explored later on the same tour.

The sketches are somewhat variable in style and degrees of elaboration, but all record very specific phenomena, particularly effects of morning and evening. Some are pale and delicate, others warm and glowing. They all, however have a remarkable degree of evanescence. As befits, perhaps a season of rain, they are studies principally of the light and atmosphere through which their subjects are seen.

The first is a rare street scene in the town itself, looking to the castle from the Hauptstrasse from outside the Hotel Ritter (12). Another returns to the subject of the bridge, castle and church, but this time from a new viewpoint going up to the Philosophenweg (17). Three study the castle by sunset, one from the garden terrace (9) and two others from a higher viewpoint, looking over the castle from the south-west (8, 15). Finally four sketches return to viewpoints looking to the castle and town from the riverbanks upstream of the bridge (11, 18, 5, 13). In the first he rose early to see whether the dawn might produce some effect, but towards the end of August the sun is already quite high before it illuminates the castle. The best effects were at sunset and he made three studies at intervals approaching the castle from upstream.

As it transpired, Turner’s continental tour of 1844 was, apart from a short trip to the north French coast in 1845, his last. In his seventieth year something failed, and his mobility and his productivity were curtailed. Every year for the best part of the last twenty years, and at intervals before that, he had documented his travels and observations in extensive series of colour sketches. His studio cupboards and drawers must have been overflowing with them, thousands of coloured sheets, quite apart from the pencil sketches. Amongst them, it must have seemed as if he was simultaneously swept up in blizzard of the most intense and sublime experience, and at the same time irrecoverably alienated. 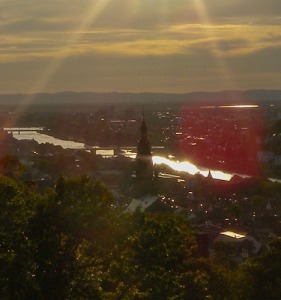 In the final part of this essay I will look at Turner’s last imaginings of Heidelberg. Before that, however, I have to give some thought to the work I am doing for Leeds Art Gallery in cataloguing their sketches by John Sell Cotman. I hope to post the final part of the present series sometime early in the New Year.