This is the first of an occasional series of articles that I will post as I work through Cotman’s Normandy subjects at Leeds Art Gallery. I am now in the latter stages of cataloguing all of the eight hundred (or more) works in the collection. In September 2016 I had the opportunity to spend the month travelling through Normandy and visited the sites of all of the subjects represented at Leeds, and as much else as I could fit in besides. I am currently working through the considerable quantity of material that I accumulated, and writing up the entries for the relevant works at Leeds. It seems a good opportunity to post some of this to SublimeSites to give a flavour of what the full catalogue – which we hope to publish online in September 2017 – will contain.

This is an impression of an etching by Cotman of part of a highly decorated church seen from a close angle, with buttresses to the left, an open square to the right, a ramshackle lean-to building against the walls in front, and in the foreground two women driving a donkey loaded with panniers of laundry. The impression is lettered in the upper plate margin, right, ‘Pl.36’, and in the lower plate margin, left; ‘Drawn & Etched by J S Cotman’ and right, ‘London, Published 1st April 1820 by J & A Arch, Cornhill, & J S Cotman, Yarmouth’ and titled in the centre, below, ‘Church of St Jacques at Dieppe/ East end’.

The plate was drawn, etched and editioned 1 April 1820 by John Sell Cotman as plate 36 of his Architectural Antiquities of Normandy, published in 1822. It was based on a sepia watercolour now at the Yale Center for British Art, Paul Mellon Collection, New Haven, USA (B1975.2.563).

The watercolour was originally owned by Sydney Kitson, and formed part of his bequest, the bulk of which was intended for Leeds Art Gallery, but was subsequently allocated, as part of a significant group of architectural subjects, to the Library of the Royal Institute of British Architects. Kitson served as Secretary of the RIBA in 1928. In 1975 the Institute decided to dispose of its Cotman drawings and sold them to Paul Mellon, who in turn left them to the Yale Center for British Art.

Dieppe was Cotman’s port of landing on each of his first two tours of Normandy in 1817 and 1818. On the first visit he stayed at the Hotel de Londres for five days June 20-25, but passed through more quickly on the second, landing on 18 June, and staying only long enough the next day to pass customs formalities, look up previous acquaintances and set off on the first leg of his onward journey.

Very little survives of his on-the-spot sketches at Dieppe. Leeds has a drawing of one of the towers of the castle (LEEAG.1949.0009.0507 – discussed separately) and the Norwich Castle Museum has a sketch of the view over the harbour and town (NWHCM : L1967.9.45). Such records as he did make, however, furnished him with the subjects of three engravings for his Architectural Antiquities of Normandy published in 1822. The present subject is Plate 36. Plate 35 shows the west front of the church of St Jacques, and Plate 34 is an expansive view of the Castle from the beach. In addition the sketch over the harbour and town provided the base of at least two fine watercolours of Dieppe Harbour and Town from the Heights (both London, Victoria and Albert Museum, 3013-1876 and P26-1934). Cotman’s treatments of the Castle are discussed separately in relation to the Leeds drawing of the castle.

The church of St Jacques represents the progress of the Gothic from the thirteenth century through to its most flamboyant expression in the fourteenth and fifteenth centuries. Cotman thought it very beautiful, and it seems plain that his interests at the outset of his exploration of Normandy were wide-ranging, and by no means confined to the Romanesque.

The present subject represents Cotman at his most obtuse and idiosyncratic. His viewpoint is in a cramped street at the back of the building, too close for easy sketching (still more for photography!) and almost contriving not to be a sketch of the church at all, so much of it being obscured by the ramshackle lean-to that has been erected against it. The tracery of the windows is blocked up and he seems as interested in the picturesque figures passing in front as he is in the architecture. The difficulty of the viewpoint has led him to rather reduce the height of the structure (designed to provide a soaring effect on the interior, and degree of elevation tor the stained glass in its windows) and (perhaps misinterpreting his original on-the-spot sketches in the studio) to mistake the depiction of the peripheral chapels to the left, and the alignment of the gargoyles along the roofline. That said the glimpse of the peak of the roof is precisely all that can be obtained whilst pressing hard against the constraining walls behind.

Click on any image to open as a slideshow

East End of the Church of St Jacques, Dieppe Photograph by David Hill, 5 September 2016, 15.04, GMT Nothing I could do about the little Renault, but it counterpoints Cotman’s donkey! 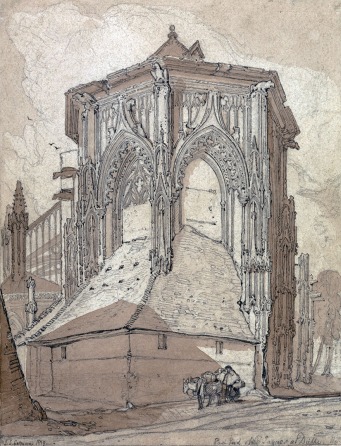 John Sell Cotman (1782-1842) East End of the Church of St Jacques at Dieppe, 1819 Graphite and brown wash on moderately thick, slightly textured, cream wove paper, 11 5/8 × 8 7/8 ins, 295 × 225 mm Inscribed in graphite, lower right: “East End of St. Jacques at Dieppe.”, Collector’s mark: RIBA blind embossed stamp, Signed and dated in graphite, lower left: “J. S. Cotman 1819.” USA, New Haven, Yale Center for British Art, Paul Mellon Collection, B1975.2.563 Cotman sketched this subject on 23 June 1817. His original sketch is lost, and this is a studio work typical of the monochrome drawings that he made as the basis of his etchings for the ‘Architectural Antiquities of Normandy’, published in 1822. Photo courtesy of Yale Center for British Art

It must have seemed an odd selection of subject to a more conventionally minded consumer of architectural subjects, but from an artistic point of view it is perfectly in tune with a strong strand in Cotman’s practice to laud the obverse to the conventionally celebrated.

Click on any image to open as a slideshow

West Front of the Church of St Jacques, Dieppe Photograph by David Hill, 5 September 2016, 15.14, GMT Looking at the clock, Cotman and I were there at similar times of day. I suspect his light was rather better than mine. From the report of his letters, he was fending off the heat. The weather was not so good here. On the other hand his deteriorated afterwards, and ours improved. 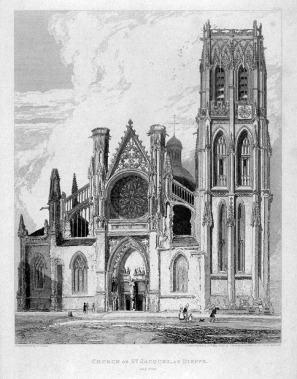 John Sell Cotman (1782-1842) West Front of the Church of St Jacques, Dieppe, 1818 Graphite and brown wash on white wove paper, 292 x 232 mm Inscribed lower left ‘Sketchd June 22/17’ and lower right ‘St Jacques, Dieppe, 1818’ Birmingham Museums and Art Gallery Cotman sketched this subject on 23 June 1817. It is a rather more recognisable treatment of the church than the Leeds impression. When this drawing was exhibited at in the Cotman and Normandy exhibition at Dulwich in 2012, Tim Wilcox pointed out that Cotman has mistaken the side doors for windows. Image courtesy of Birmingham Museums and Art Gallery; scanned from Dulwich 2012

The etching of the West Front is based on a drawing now at Birmingham Museums and Art Gallery, and both represent Cotman at his most antiquarian, and despite the intrinsic interest of the subject, and his evident delight in its intricacy, their effect is comparatively academic. When this drawing was exhibited at in the Cotman and Normandy exhibition at Dulwich in 2012, Tim Wilcox pointed out that Cotman has mistaken the side doors for windows. If so, this might also be an effect of misinterpreting his original on-the-spot sketches when making his studio drawing. In this case, however the etching has a very specific detail above the door, where a lintel carries the inscription ‘D.O.M’, that is not present today, but its appearance in Cotman’s drawing and etching is hard to account for by a simple mistake. The difference in the doors, however, is hard to overlook, especially in a depiction that affects such crisp academic accuracy. If he has indeed mistaken, he has undermined all the evident time and labour that he invested in his sketches and finished work. By contrast, Turner in his mature work – sometimes equally exposed to such criticism – never relied on such a stylistic claim to objective accuracy or laboured so much over the sketching and the delineation. Years before, when working out his artistic direction, Cotman  looked at the front of Peterborough Cathedral and declared: ‘Peterbro’ is too perfect for my pencil; every architect can make a better Drawing from that than I can therefore to them I will yield up my claims. – ‘. Cotman seems to have been on the stronger ground, as Turner, when working more to an artistic than an architectural purpose. 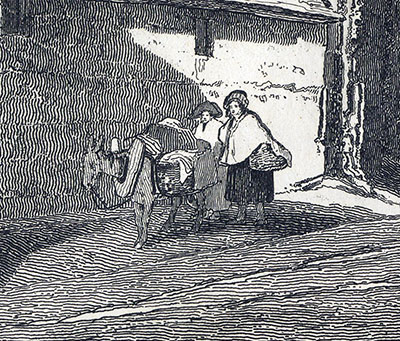