This is a further instalment in a series that retraces Cotman’s footsteps through his native county of Norfolk. Here we visit the isolated site of St Benet’s Abbey. This stands in a marshy plain near the junction of the rivers Ant and Bure about ten miles directly ENE of Norwich, but much further by road, south of the village of Ludham. The abbey has long since disappeared, but in the eighteenth century its gateway was pressed into service as the foundation and outbuildings of a tower windmill. This became one of the most important subjects to artists in Norfolk during the Romantic period, and for Cotman the subject for two of his greatest works.

Cotman sketched and painted windmills throughout his career. For him they articulated a poetry of relationship with the elements. He made dozens of works in which they figure. Many are arresting images, but in St Benet’s he found a composition that must be judged a masterpiece by anyone’s standards.

What is more, he found it in a quite unexpected place. For it is not in a watercolour or a painting, but rather in a line etching, and in a project whose objective was more antiquarian than artistic.

In 1811 Cotman embarked on a series of sixty etchings of architectural subjects in Norfolk. He was not so much interested in the grandest subjects such as Norwich Cathedral, but rather in out-of-the way curiosities, humble survivals down obscure back lanes and overgrown churchyards. St Benet’s satisfied all these preferences. Its site is the flat Bure marshland north of Acle and today is approached down a narrow (but mostly surfaced) field track from Ludham, or for many contemporary tourists, by boat. It stands in an ocean of space, and seems designed with the sole idea of pointing out the scale of the sky. St Benet’s, it has to be said, is a building of extremely incidental architectural or antiquarian interest. There was once a major medieval abbey here, although it is difficult to fathom quite why, since the site is pretty much without foundations. Unsurprisingly the abbey itself is now levelled to the sward. The only surviving historical structure is the abbey’s gatehouse redeveloped in the eighteenth century as the site of a windmill to grind rape seed, and then sometime in the late eighteenth or early nineteenth century adapted as a wind pump to lift water from the surrounding grazing land into the river Bure.

Cotman made several visits to St Benet’s. The first is dateable to 1807 or 1808, and resulted in an upright watercolour at the Lady Lever Art Gallery, Port Sunlight recording the mill from the west:

The view looks more-or-less directly across the face of the gatehouse to a distant postmill. If the distant mill ever existed, it would have been located near the junction of the Hundred Stream and the Thurne River, but there is nothing indicated in that north-east direction in the map of Norfolk published by William Faden in 1797.

Comparison of the watercolour with the surviving architecture shows that whilst Cotman carefully follows the general positioning of openings and the general masses, there is significant variation in specifics. The exact detail of the angle buttress to the right, for example, is altered, as is that of the embedded buttress at the foot of the tower. Cotman also suggests that the ground floor doorway to the tower was a Norman portal of stone, but in fact appears always to have been of more prosaic and functional brick. Today there are windmills visible to the east of St Benet’s on the river Thurne at Thurne, and Cotman could easily have been remembering one of those. Faden’s map indicates a ‘Drain Mill’ directly east of St Benet’s.

This watercolour is painted in a slightly naif style with well-defined washes and a frank sense of process that Cotman turned into a distinctive manner in the years about 1808. The style coincides with his first extended essays in oil painting, and also with the establishment of a series of drawings for circulation amongst his pupils. He advertised a series of six hundred of these in 1809, and the Lady Lever watercolour bears a number ‘1276’ that shows that eventually it took its place in the series. For the more advanced students, who were practicing painting in watercolour, the frankness of the process would have made it a good example to copy.

The San Francisco Museum of Art has a version of the composition that is almost certainly such a copy by an able pupil:

The detail is followed carefully and in some respects, especially the foreground grasses, exceeds the original. The colour is generally more bold, and the sky altogether more dramatic. The quality of detail, particularly in the way that it understands the mechanics of the windmill is also impressive. The quality of the paintwork, however, lacks the delicacy that generally distinguishes the hand of John Sell Cotman, but we must nonetheless admit that this must have been a pupil of outstanding ability, very closely supervised, and one that had very well assimilated the artist’s approach.

Click on any image to open full size, with captions in gallery view: 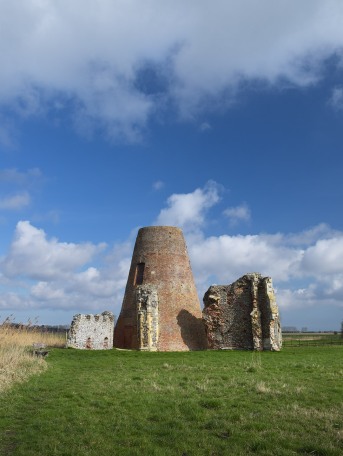 St Benet’s Abbey from the westPhotograph taken by David Hill, 7 March 2017, 11.23 GMTClick on image to view at full size. 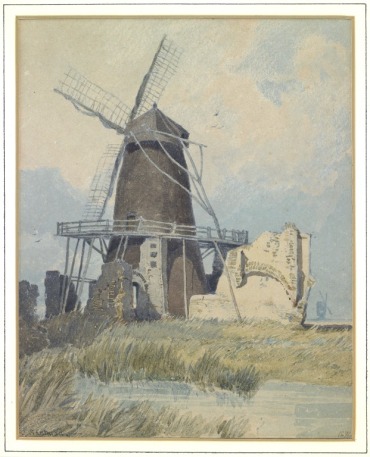 John Sell Cotman (1782-1842)St Benet’s Abbey, Norfolk, from the south west , c.1808Graphite and watercolour on white wove paper, 282 x 224 mmLiverpool, Walker Art Gallery: From the Lady Lever Art Gallery collections (LL 3946)Image courtesy of National Galleries on Merseyside.To see this image in the NGM’s own website, click on the following link, then use your browser’s ‘back’ button to return to this page:http://www.liverpoolmuseums.org.uk/walker/collections/works-on-paper/item-228178.aspx

after John Sell Cotman (1782-1842)St Benet’s Abbey, Norfolk, from the south west , c.1808Graphite and watercolour on white wove paper, 289 x 233 mmUSA, San Francisco Fine Art Museums, Achenbach Foundation for Graphic Arts, 1963.24.4Image courtesy of Achenbach Foundation for Graphic Arts.To see this image in the San Francisco Fine Art Museums own website, click on the following link, then use your browser’s ‘back’ button to return to this page:https://art.famsf.org/john-sell-cotman/windmill-196324456

This seems a good place to post what I’ve written thus far. I’ll come back to Cotman’s 1813 etching shortly. But first we should think about windmills as a subject a little more generally.