Rembrandt, Saskia and me #3

This is the third instalment of a journey stimulated by a 1636 Rembrandt etching, Self Portrait with Saskia. Here we begin to explore the relationship and marriage that led up to the composition.

I am by no means the first to take an interest in Rembrandt’s wife. Her story was largely unknown up to the nineteenth century, but since then a succession of scholars have gradually brought her into the light. Her life and subsequent marriage to Rembrandt’s has most recently been comprehensively researched by the Dutch scholar Ben Broos. His book Saskia: De Vrouw van Rembrandt, was published by W books in 2012. Surprisingly, since without doubt it is a major contribution to the Rembrandt literature, it was only published in Dutch. 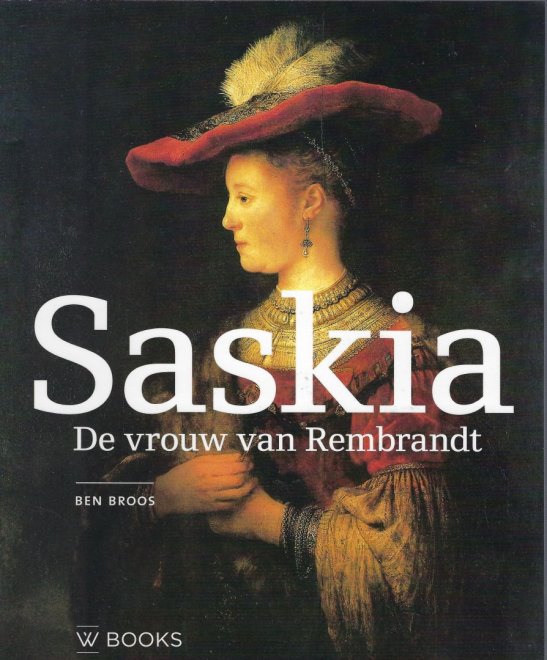 The publication of Broos’s book marked the 400th anniversary of Saskia’s birth, which was celebrated enthusiastically by her home region of Friesland. The places with which she was associated were all highlighted and a guided tour published to the key sites.

The brochure is still on line and the complete text may be downloaded here. The text is all in Dutch, but if you haven’t used it before, you might be surprised how intelligible Google translate can be.

That brochure has been supplemented by two more recent guides available <a href=”http://https://historischcentrumleeuwarden.nl/PDF-bestanden/Saskia_Rembrandt-4.pdf” rel=”noopener” target=”_blank”>here and <a href=”http://https://historischcentrumleeuwarden.nl/toerisme/stadswandelingen-apps?id=1523%3Asporen-van-saskia-stadswandeling&catid=11” rel=”noopener” target=”_blank”>here:

Saskia’s story quickly becomes compelling. Here is this extremely well-bred young woman, born into a very cultured and established family of provincial Leeuwarden suddenly translated into marriage with the artist son of a miller from Leiden, plying his trade in the teeming city of Amsterdam.

So it was last summer that I found myself little village of Sint Annaparochie, little more than a cluster of houses, shops and farms straggling along a dead straight roads and isolated it seems amongst hundreds of square miles of sky-swept fields.

The village seemed to take some reaching, even in a car. In the seventeenth century it would have been a journey of couple of days from Amsterdam, mostly by boat across the Zuideree. But it was here that Saskia lived for a few years from age sixteen in 1628. She helped keep house for her elder sister Hiskia and brother in law, Dr Gerrit van Loo, who was secretary to the administrator of the North Friesland region of Het Bilt. This was a rich agricultural land, and well connected by water to major markets nearby. Though Saskia’s future was as yet uncertain, her family was very well established amongst the Friesland elite, and for the time being she could enjoy a well upholstered, cultured and well-protected position.

They lived in the Regthuys (or courthouse) opposite the church and this can be seen in a late eighteenth-century watercolour belonging to the Fries Museum. It is the building with the sign board hanging from the gable. 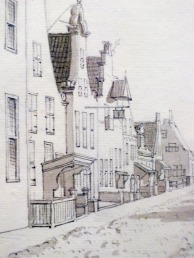 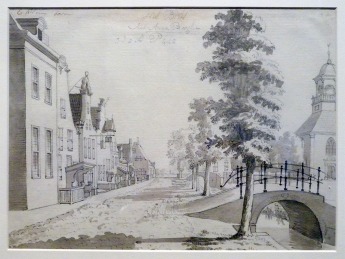 The owner of a clothes shop on the site today, enthusiastically beckons visitors to step inside. 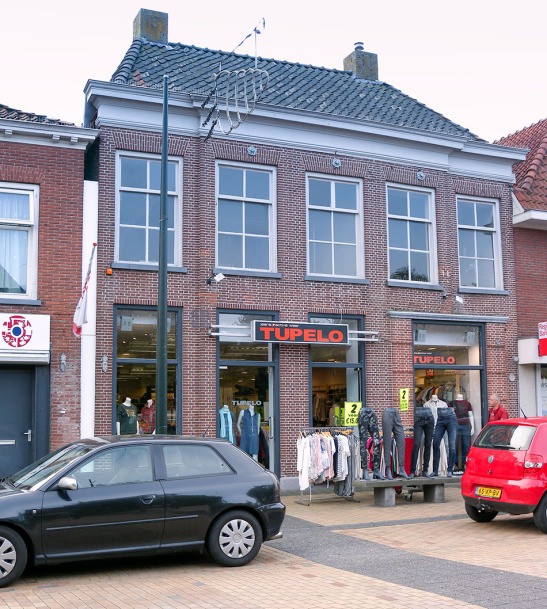 And although the front of the building has certainly been rebuilt, the plot stretches so far back from the street as to easily have accommodated a sizeable family and all offices.

Sint Annaparochie is a substantial enough place. A couple of doors from the site of Saskia’s house my companions discovered a truly wondrously large bricolage shop. The ladies came out with armfuls of useful and mostly decorative bargains. Further down the street, the most practically-minded of our party found one of the finest general hardware stores in his (extremely) extensive experience. Sint Annaparochie is a grounded, thrifty and hard-working place, but wondering up and down one could not help but be struck by how far removed it is from the cultural extravagance and hurly-burly of Amsterdam.

Yet it was here that Rembrandt came in 1634 to marry Saskia in the little church opposite the Regthaus.

Attractive as the church certainly is, it is not, sadly the same building as that Rembrandt and Saskia knew. This replaced their church. But to stand outside is nonetheless salutary. It is where it is that is most surprising; on the very northern fringe of the country. Rembrandt might easily, one supposes, have found a bride in his entrepot milieu of Leiden or Amsterdam, or instead have enjoyed the more dissolute existence for which painters were generally renowned. But for him to have journeyed out here to be married demands some explanation. She must have been pretty special, this Saskia Uylenburgh.