Rembrandt, Saskia and me #8

This is the eighth instalment of a journey of exploration starting from a 1636 Rembrandt etching, Self Portrait with Saskia. In the previous part we heard of their first year or so of marriage, and left them together in their first grand house enjoying the fruits of Rembrandt’s success. It is now time to return to the starting point, and consider the etching in the context of its creation.

The etching has often been reproduced, and is usually given as the principal representation of this important period in Rembrandt’s life. It does not ever seem to have been given full consideration in the light of its specific context. They were married in 1634 and the truth is that there has been a chronological elephant lumbering about in this room for nearly four hundred years and no-one, at least in the recent literature including Simon Schama’s monumental Rembrandt’s Eyes of 1999, the National Gallery of Scotland’s Rembrandt’s Women of 2001, Ben Broos’s Saskia: De Vrouw van Rembrandt of 2012 or most recently the Fries Museum’s Rembrandt & Saskia: Love and Marriage in the Dutch Golden Age from 2019, appears to have seen it.

Through 1635 Rembrandt enjoyed growing success and the couple lived very well. Saskia’s pregnancy ran its full and evidently happy course, and she was delivered of a baby boy in December 1635. He was named Rombertus after Saskia’s father and baptised on December 15 in the Oude Kerk, the principal church in Amsterdam. Johannes Sylvius, the pastor of the city of Amsterdam, and his wife, Saskia’s cousin Aejlte Uylenburgh were the witnesses. The event must have seemed to cement the bonds that had been forged between Rembrandt and the Uylenburgh family over the previous few years.

Rembrandt van Rijn Portrait of Johannes Sylvius, 1633 Etching on paper, 166 x 141 mm Morgan Library, New York, RvR 357 Image courtesy of the Morgan Library To see the image in the Morgan Library online catalogue click on the following link, and use your browser’s ‘back’ button to return to this page: https://www.themorgan.org/rembrandt/print/179837 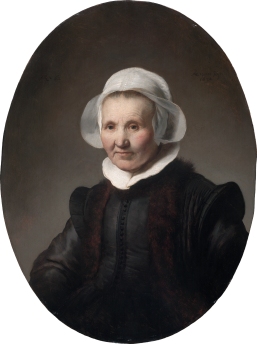 The blessing inscribed in naming the boy after Saskia’s distinguished father – the former mayor of Leeuwarden, proved little protection against the age’s wanton destruction of infant souls. Rombertus died at scarcely two months old. The cause of death is not known. Infant mortality rates were extraordinarily high during these times and Amsterdam seems to have been swept by disease with grim regularity.

Simon Schama (p.369) describes 1635 as ‘the worst plague year in living memory, more horrifying than any Amsterdammer could recall. One in five of the population perished in the contagion. Those who could fled to the countryside. Those who could not waited for the angel of death to pass and prayed that their groins and armpits would not begin to mark with fatal purple, like the stain of sloes. The littlest were the most vulnerable of all. Rembrandt and Saskia’s first child, named Rombertus, after Saskia’s father, survived barely two months. He was buried by his father and mother in the Zuiderkerk, close by Hendrick’s house, on February 15, 1636, just another baby to add to the hecatomb of innocents taken by the monstrous epidemic.’

One source says 20,000 perished in Rembrandt’s home town of Leyden, and others that in 1636 there were major outbreaks in Newcastle, Hull and London. A fifth of the population of Amsterdam as estimated by Schama could have numbered 30,000 souls. Poor little Rombertus took his place in a massacre of thousands of infants taken in a single year. Saskia carried the child in a period which for her was one of household independence and prosperity. She and her husband must have planned the nursery in the new house, engaged a nurse, bought crib and layette, hangings and baby lace, organised the baptism in the city’s grandest church, and thought about how the child would carry history into the future by bearing the name of his illustrious maternal grandfather.

The date tells us only that it was made in the year of their loss, but the expressions suggest immediate proximity. Saskia looks distracted, introspected, her eyes focused on something not in this world: Rembrandt’s face lacks all animation except for a set jaw, and his eyes pierce through a mask of shade.

In the most substantial recent critical biography, Rembrandt’s Eyes, 1999, Simon Schama does not make any direct connection with the bereavement, but does consider the more general situation (p.369): ‘Once again, Rembrandt threw convention to the winds, or at least reinvented it. For the etching has no precedent and no successor.. The compositional novelty was to align husband and wife not parallel to the picture plane but at near right angles to it. On the one hand this preserved the customary hierarchy of the marriage portrait, with Saskia notionally seated ‘behind’ her husband. Yet, not least because of the brilliant lighting that falls on her rather solemn features.. Saskia can also be read as seated opposite Rembrandt on the far side of the table. The visual implication is that once he is done with his work, he will turn to face her. For the moment, however, the work is everything. And the alignment of arm and head at right angles to each other also has the additional, all-important effect of engaging a third party – the beholder – in this work. Rembrandt’s sketching arm, cropped at the bottom, is pushed so far forward to the picture space that his whole presence seems to project through it, through the looking glass on which his stare is intensely concentrated as he works, his hand moving in ‘blind’ obedience to the instinctive instruction of the eye. It is as though we were behind a two-way mirror, with the artist staring simultaneously at us and at himself. Surreptitiously the beholder becomes both observer and object of observation; and Rembrandt’s wife looks (from an angle) at us looking at him looking at us. This is as intimate as it gets.’

Self Portrait with Saskia: Detail of bounding line/ edge of mirror

The complexities of the composition are perhaps greater that even Schama intimates. He is obviously right that a mirror is being invoked. The etching is unusual in having a thick bounding line which is surely intended to represent the edge of a mirror. But Schama’s idea that the composition situates us behind a two-way mirror, looking through it to the artist at work is a very contemporary conceit. Rather, however, the composition is the direct representation of the mirror itself. We know that Rembrandt was right-handed, and he appears here reversed, exactly as he would have appeared to himself drawing his own reflection. 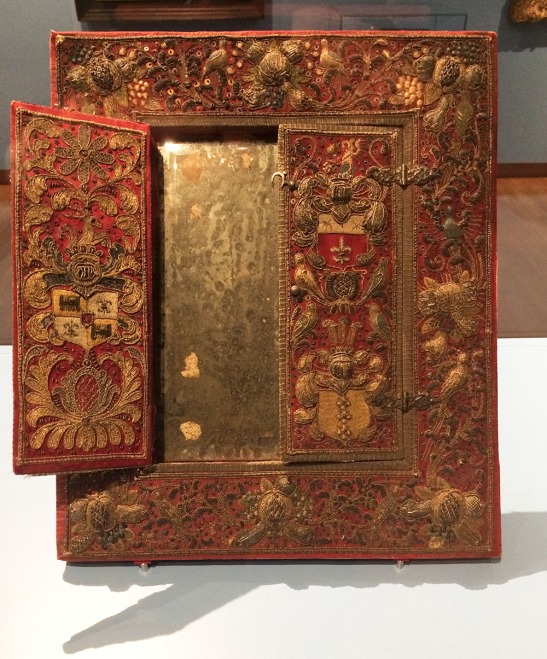 One item in the exhibition of Rembrandt and Saskia: Love and Marriage in the Dutch Golden Age, that I visited in Leeuwarden in January (see part #1) was a mirror dating from 1638. The involvement of a mirror in the Self-Portrait with Saskia is made all the more striking by the realisation that flat glass mirrors were a relatively recent invention. The technique of making glass of sufficient evenness and clarity; blemish-free and without colour cast, coupled with the alchemy of coating it with an immaculate coat of reflective silver was perfected only in Venice in the sixteenth century. The cognitive allure of such self-examination proved irresistible, and demand for Venetian mirrors boomed throughout Europe. It seems to have swept the continent like a mania. Venice guarded its secrets on pain of death, and mirrors became some of the most coveted items in the world. Mirrors of course flooded into Amsterdam, but were extraordinarily high value items at the time of this portrait and indeed remained so throughout the century.

The composition has yet another layer of complication. Were this a drawing it could straightforwardly be a transcription – however brilliant – of what was seen in the reflection. Because it is an etching, the printing process has reversed the image. In short, if Rembrandt had drawn his etching direct from the reflection, he would appear right handed in the print. So to produce an etching of a mirror image requires some thought and planning: It is literally a double-take.

Under the circumstances, this was quite an occasion for self-reflexivity. An artist with inflated ideas of what he might be: A velvet hat, ostrich feather, fur robes, a twirled moustache and flowing locks. His subject is a decent woman of patrician class, sober and demur. Neither is a great beauty. The artist is hardly a Rubens or a Van Dyck or even a Frans Hals, still less a Caravaggio, Titian or Leonardo. Both, rather, are denizens of the contemporary ordinary, making what they can of themselves, within the constraints of the real. They had money, possessions, situation, profession, and life, but towards what purpose? These two are caught between their pretensions and their reality. It as if Rembrandt has taken the characters flaunting their good fortune in the Dresden portrait, and unseated them with the tribulations of existence and self-doubt. The etching does not need to acknowledge the private circumstances of its making, at least in terms of the death of Rombertus, but instead it transmutes those circumstances into public questions of the human condition and purpose. To confront and represent that condition was always the ambition of Rembrandt’s art, no matter at how dear a cost fate supplied his materials. 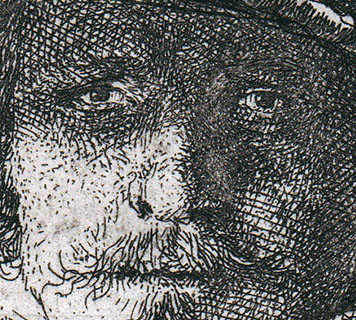