John Sell Cotman: A Harbour for the Soul #1

This is the first instalment of an article presenting a recently rediscovered watercolour by John Sell Cotman. This appeared at auction on 9 December 2014 where it was catalogued as ‘Circle of John Sell Cotman’ and sold under the title of ‘The Student’.

At the time of the sale I was just beginning work on the new, recently-published catalogue of the collection of John Sell Cotman at Leeds Art Gallery (see http://www.cotmania.org) and I recognised a relationship with an etching that I had seen in the Leeds collection. 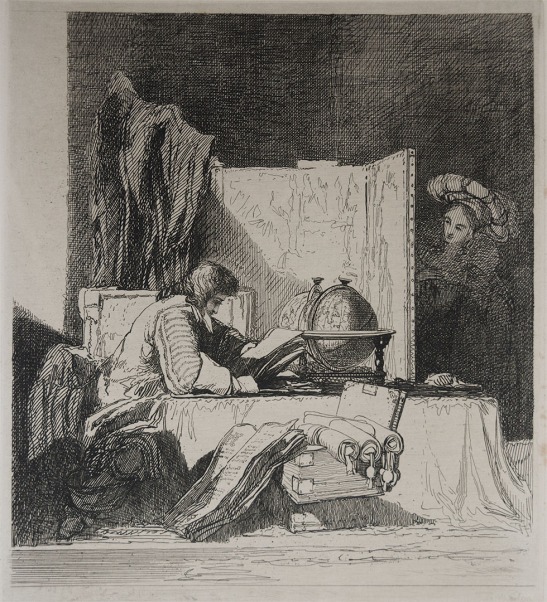 My hunch was that the watercolour might be by one of Cotman’s pupils, or perhaps even by one of his sons. Either way, it seemed like an attractive connection with a known Cotman subject, and as substantive a connection as might ever fall within my limited personal budget. So I was especially delighted to buy it. Little, however, could I have imagined what was to fall into place around it as the Leeds research unfolded.

To be honest, I bid for it unseen, and without any great expectation of succeeding. So my first sight was on unpacking it after delivery. It was framed in a dusty gilt frame under glass, and mounted in a brown, stained mat. Even through the fogged glass, one could see that this was a bold piece of colouring.

[photo of picture in frame]

Turning it over, there was a wooden backboard with an old label stuck to it. The paper was covered with a piece of polythene sealed with sellotape, but even so one could see written on in in an old ink script: ‘The Student/ J.S.Cotman’. The backboard had been sealed with brown paper tape, but beneath that was edged all around with the residue of a green/blue tape. There was no sign of blue tape on the frame, suggesting that the latter was certainly not of the same age as the backboard. Taking the backboard off, the picture itself, painted on thin paper with neat cut edges, was stuck down on a card support which was inscribed on the verso in pencil, ‘No.22’. The colour out of the frame was a bit of a revelation, with its swathe of scarlet across the foreground, bright green jacket of the figure, brilliant yellow of the screen and papers, broad blue and black of the background, deft details of pink and blue for the face and jacket. The immediate impression was of bravura and confidence, bold colour and delicate touch. Rather more impressive than I had been expecting!

[Click on any image to open full-size in gallery, and to read captions] 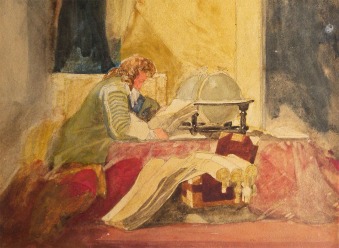 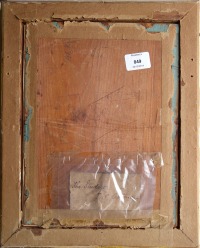 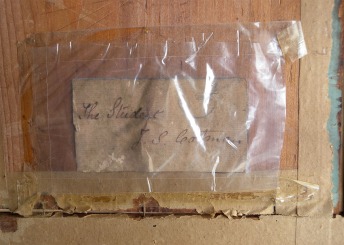 So what might the number signify? Potentially a sale or exhibition number, but decidedly a quest for a needle in a haystack quest. Sometime before I had bought a copy of the catalogue of the ’Exhibition of Drawings by John Sell Cotman’ held at the Norwich Arts Circle in 1888. This was the first major exhibition of Cotman to be held after his death in 1842, so that seemed a good place to start. 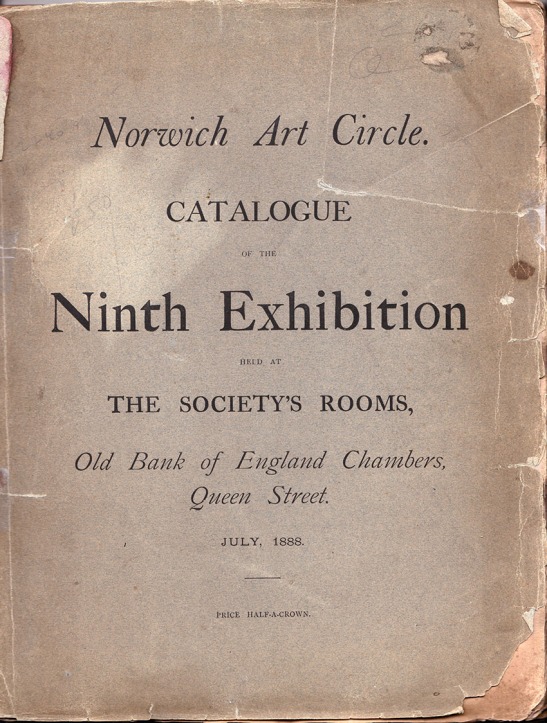 Number 22 in the list reads: ‘The Philosopher in his Study: A man in green coat seated near old chest with scrolls and globes. Screen in rear. Etched by J.S.Cotman. 9 1/2 x 7 3/8 ins. [lent by] J.H.Inglis Palgrave’.

The succeeding flurry of activity is a bit of a blur. But it didn’t take very long on Google to identify the owner in 1888 as Sir Robert [not ‘J’] Harry Inglis Palgrave (1827-1919. He was one of the most eminent bankers and economists of his day: The grandson of Cotman’s important patron, the Great Yarmouth banker Dawson Turner, Palgrave joined Turner’s bank at Yarmouth aged 18 and went on to be a director of Barclay’s and editor of The Economist.

His father, Sir Francis Palgrave (born Cohen 1788-1861) was equally eminent as an archivist and historian, and through his antiquarian interests made the acquaintance of Dawson Turner in 1819. In 1823 he married Turner’s eldest daughter Elizabeth, and changed his surname to Palgrave – his mother-in law’s maiden name. Elizabeth Turner had been a pupil and close associate of Cotman for over a decade by the time of her marriage, and Sir Francis had contact with Cotman up to the artist’s death. It seems most likely that he and his wife were the original collectors of the drawing. They had four sons, and three lent Cotmans to the 1888 exhibition. There might even have been some occasion for its acquisition, given that the subject represents antiquarian archival activity; for Sir Francis was knighted in 1832 for his work in public records and historical publications. In 1834 Palgrave was instrumental in Cotman securing the post of Master of Drawing at King’s College School, London.

The watercolour presided over my desk for the next three years whilst I worked my way through the 850 or so Cotman drawings in the Leeds collection. At regular intervals I came across drawings that related to the watercolour. These are discussed in the next instalment of this article. In parallel to that, I also worked on Sydney Kitson’s treasure-trove of notebooks called ‘Cotmania’ , which he gave to Leeds with his collection on his death in 1937. These are all now online in the Leeds online catalogue at www.Cotmania.org

Kitson made it his business during the last fifteen years of his life to see every Cotman drawing and watercolour that he could manage in galleries, salerooms and private collections. He made a note of every one as he went along. So, a couple of years into the project, it was especially satisfying to come across a reference to this watercolour. The ‘Cotmania’ notebook VI for 1930-31 preserved in the Kitson archive at Leeds Art Gallery, records that he saw it on Sunday May 17 1931 when he ‘Called on Mrs Barker, 1 Hamilton Gardens, Felixstowe (granddaughter of Lady Palgrave’. She has – [lists drawings and watercolours including] (4) ‘The Astrologer’ based on the etching of seated man, but without Figure of woman coming round screen on r. green & scarlet – c.1828-30. 9 x 7 1/2.’

Sydney Decimus Kitson ‘Cotmania’ notebook VI, 1930-31 Page for 17 May 1931, recording his visit to see the collection of Mrs Barker of Felixstow, the daughter of R.H.Inglis Palgrave, where the present watercolour was known as ‘The Astrologer’. Leeds Art Gallery, Sydney Kitson Archive To see this page in the context of the online catalogue of the Leeds Art Gallery collection of John Sell Cotman,, click on the following link, and use your browser’s ‘back’ button to return to this page: https://cotmania.org/archives/sdk/1/2/1/6/150 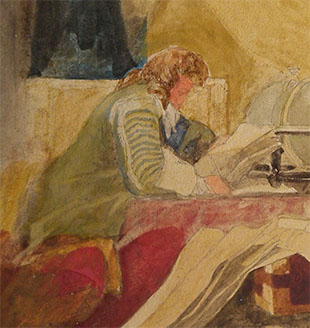 4 comments on “John Sell Cotman: A Harbour for the Soul #1”