This is the second instalment of an article presenting a recently rediscovered watercolour of ‘The Student’ by John Sell Cotman. Part 1 described the discovery and identification of the subject, and here I explore some of the related works identified during my research into the Leeds Art Gallery collection of Cotman drawings. 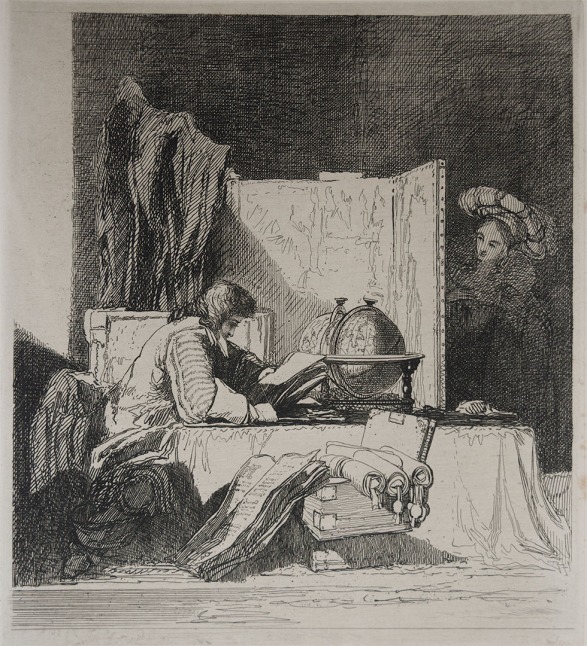 The watercolour is related to an etching. This was published posthumously by the Norwich publisher Charles Muskett in 1846 in an edition of ‘Eight Original Etchings by the late John Sell Cotman’. Leeds has two copies of the print (LEEAG.1949.0009.0775 and LEEAG.1945.0018.0027). Sydney Kitson’s, Life of John Sell Cotman, 1937, pp.130-1 records that a copy of this edition from the collection of Cotman’s Yarmouth patron Dawson Turner, was annotated to the effect that all the etchings in the series were made in 1833. Although both watercolour and etching show the same subject, the etching is an independent restatement of the subject, more or less varying the detail throughout, and introducing a female figure at the right.

The subject is a Scholar in his Study; a youngish man, dressed in sixteenth or seventeenth century costume, with long hair or a wig, seated at a table reading a large volume opened against a globe, with a large folio and scrolls in the foreground, resting on a chest, with a screen behind. It is one of a series of subjects from the 1830s in which Cotman explored scholarly immersion in books and art and antiques. The subject is a study in genteel grace in the presence, possession and production of cultural materials. It is plainly self-reflexive, and the very epitome of a condition that Cotman strove to attain for himself and his family, as a haven in an increasingly philistine world.

It was a pleasant discovery, therefore to realise that the Leeds collection contains Cotman’s original pencil sketch for the etching.

This is a confidently-drawn and sensitive, but now rather faint, graphite study for a composition of a Romantic, historical, interior. There is a finely-dressed scholar in the left foreground seated facing right at a large table, reading in a large book on a stand and writing with a stylus in his right hand. Before him on the table are two globes in stands, and besides him a wooden chest on which are laid several large old scrolls, and against which is an open illuminated manuscript. Directly beyond him is a folding screen and behind a plinth on which stands an object, possibly a sculpture, covered in drapes. A finely-dressed female figure, in what appears to be sixteenth-century costume, with a large-collared coat and an elaborate quilted hat, stands to the right, looking around the screen as if she has just entered the room. The subject is surrounded by a fine, ruled framing line.

Kitson’s 1937 catalogue of his collection, now part of the Cotman archive at Leeds Art Gallery, identifies this as a sketch for the etching by Cotman that Kitson calls ‘The Spanish Student’. The published etchings do not appear to have had a printed list of subjects, so it is unclear on what grounds Kitson’s 1937 list gives that title. A. E. Popham in his 1922 list of Cotman’s etchings calls it no.342 as ‘(The Student)’, where the brackets indicate that the title had no firm foundation.

The composition is one of a group of subjects by Cotman from the later 1820s and 1830s in which he imagined historical subjects in a variety of manners favoured by Dutch Old Masters. Amongst these there is a particular strand in which he imagines scholars ensconced in their studies and immersed in their paraphernalia of books and art and antiques. There is clearly a self-projection of life in the Cotman house on Bishop’s Plain in Norwich, surrounded by his literary and artistic props, living out the life of the grand artist. Like Rembrandt, Cotman surrounded himself with a collection of antiques, missals, art, furniture and fabrics.

The composition of chimes with numerous compositions from the seventeenth century. Amongst those that come readily to hand are:

[click on any image to open full-size and read captions] 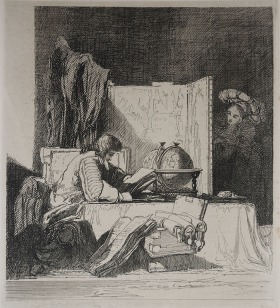 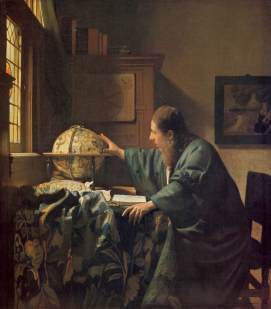 Besides the watercolour and etching, there is also a pencil study in a private collection. This was sold by Chorley’s Fine Art & Antiques, Cheltenham, including Jewellery and silver, Day 1: 24 September 2014, Lot 476 as ‘A Seated Cavalier, Writing’. This is a close variant with figure in the same pose, but dressed differently, wearing a large plumed hat, and drawing or writing on a large folio, with a dog seated at his feet.

That study informs a large and more finished pencil study in the Leeds collection, which reiterates the same figure seated at the table, a dog at his feet, but now with a crowd of onlookers behind, and a priest and finely dressed gentleman to the right (LEEAG.1949.0009.0681.

This is a firmly-drawn graphite study of an historical figure subject. It depicts the interior of a large room with a finely-dressed scholar in the left foreground, facing right seated at a table reading writing (or drawing) in a large book with a stylus in his right hand. Behind him, four figures watch on whilst a greyhound sits by a folio at his feet. To the right stand two figures; the first a monk or ecclesiastic (perhaps an academic) in long gown and hood, carrying a thick book in his right hand; the second a gentleman cavalier, evidently entering the room to visit, with riding boots and sword and holding a plumed hat in his right hand. The drawing is inscribed by Cotman in graphite lower left ‘Cotman’, and illegibly top left and along upper edge. Inscribed on verso in graphite by unknown hand: ‘J S Cotman/ bought at his sale/ by [?]Tyrell/ of Beccles’.

This composition is a direct development of the figure study sold at Chorley’s. Here we appear to have a gentleman come to visit. It is significant that the visitor is dressed in the same manner as the artist. This would imply that the artist is of the same social status as the gentleman. We may further infer that the artist is a man of property and possessions, is receiving visits at his home where he is the centre of attention, and his work is of such importance that he is justified in concentrating on it, and may chose when to break off to acknowledge his visitor’s presence. The presence of the robed figure is interesting. He stands by as if he was already on the premises when the gentleman arrived. So the artist is receiving audience from church and state, and has the respect of both. It is not hard to see a good deal of wilful self-projection here, and perhaps something of a lecture to his erstwhile patrons and associates. The subject might almost be Rubens receiving the Duke of Alba and the Bishop of Antwerp if such a visitation ever occurred. Either way, in Cotman’s mind it was certainly a design for the way things ought to have been for an artist in Norwich.

It is worth noting that the artist makes a ghostly appearance at the centre of the composition, as if Cotman’s first idea on this sheet was to place his principal figure there. Moreover it does appear from their linear quality that both the figures on the right have been first traced onto the sheet. Further investigation might reveal further parallels and networks of sources that come together in this composition. Furthermore it certainly seems likely that this relatively large composition was made as the basis of a finished work. Whether that might have been a large watercolour or perhaps even an oil painting is not clear, but Cotman did exhibit with the Old Watercolour Society, London, 1833, no.249 a subject entitled ‘A Painter’s Study’, which is otherwise untraced.