This is the fourth instalment recording the recent exhibition of ‘John Sell Cotman: Shelter from the Storm’, held at Leeds Art Gallery, 13 October 2017 to 21 January 2018. Here, we explore the framed works shown in the principal room under the theme of ‘Shelter’.

Cotman had a strong sense of the growing philistinism of his times. His work may be seen as an aesthetic antidote to that, his studio as a harbour for his soul and his house as a refuge for his family.

Shelter
Cotman intended that his great new house should be a school of art where the nobility and gentry of Norfolk and the citizens of Norwich might forgather to receive his instructions in the elegant arts of drawing and design. He furnished the house with casts from the antique, with armour and bric-a-brac, and with models of ships of all sorts, from cobles to men-of-war; while selected examples of his drawings and etchings were hung on the walls of the numerous rooms.’
Sydney Kitson, Life of John Sell Cotman, 1937, p.247, on Cotman’s house in Norwich, 1824.

A small boy, aged perhaps two or three, wearing a sailor’s cap. Possibly a portrait of Francis Walter Cotman, c.1819
Cotman was particularly tender to his children.
This affectionate sketch probably records his fourth child, Francis Walter, who was born in 1816. At that time the Cotman family lived in a (still-surviving) small house at Southtown, Yarmouth. This drawing might very well record a day out at the beach.
LEEAG.1949.0009.0612
https://cotmania.org/works-of-art/43969

The Gleaner; ?Ann Cotman, the daughter of John Sell Cotman, aged about twelve, c.1824
Cotman made many sketches and drawings featuring children. Many of them may be of his own family. The similarity of this girl’s profile to depictions of Mrs John Sell Cotman suggests a family relationship. The model here could be Cotman’s only daughter, Ann, who was born in 1812, and appears here to be about twelve years of age.
Ann became a talented draftswoman in her own right, and assisted her father in his drawing school activities.
LEEAG.1949.0009.0685
https://cotmania.org/works-of-art/44029

A shady pool on the river Greta near Rokeby, 1805
After two weeks at Rokeby, Cotman stayed on at the nearby Morritt Arms at Greta Bridge.
In his letters he describes bathing every day in the river a short way above Greta Bridge. In between times he painted this from nature. The site is perfectly recognisable today, and still a good spot for swimming (with care!).
LEEAG.1955.0016.0002
https://cotmania.org/works-of-art/44888

The Overgrown Well, c.1809
After 1809 Cotman developed a library of drawings for his students to borrow and copy.
The Times said: ‘it shows the artistic quality that great man cannot help getting into. Everything in it is very carefully planned, you see how everything is done – the stylisation of the foliage and the tinting of the individual bricks or stones – and yet the total effect is intensely though quietly emotional.’
Presented by Robert Hawthorn Kitson.
LEEAG.1936.0025
https://cotmania.org/works-of-art/42628

The Refectory of Walsingham Priory, Norfolk, c.1808
From about 1808 Cotman sequestered himself amongst the quiet churches and abbeys of Norfolk. Walsingham is in north Norfolk, not far from Wells-next-the-Sea and the subject remains recognisable.
Cotman was particularly attracted to humble dwellings – ‘cots’ as they were called. This appears to be a carpenter’s bothy. Records show that there was building work occurring in nearby Walsingham Hall.
The watercolour belonged to Sir Michael Sadler, who was Vice-Chancellor of the University of Leeds 1911-1923.
LEEAG.1931.0008.0008
https://cotmania.org/works-of-art/42404 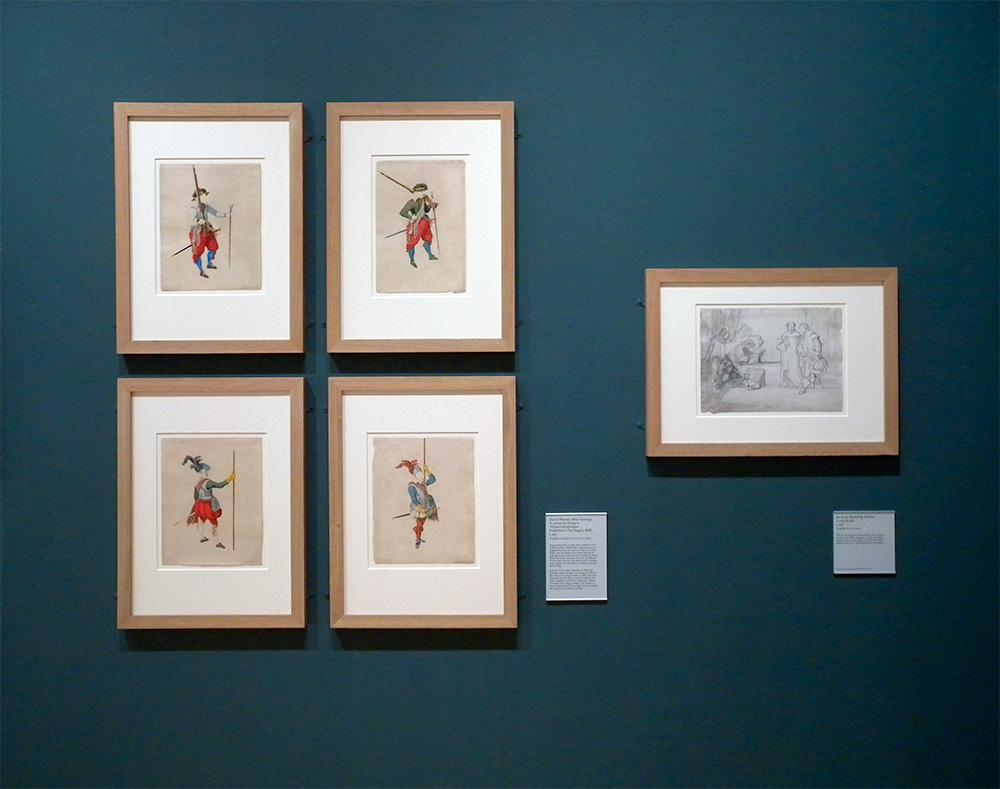 An artist receiving visitors in his studio, c.1833
This is one of several scholar compositions that Cotman made in the 1830s.
Here an artist receives grand visitors in his studio. The artist is, however, as distinguished as his visitors. The subject might almost be Rubens receiving the Duke of Alba and the Bishop of Antwerp if such a visitation ever occurred. Either way, it was certainly an idea of the kind of attention that Cotman would have liked to have received at his studio in Norwich.
LEEAG.1949.0009.0681
https://cotmania.org/works-of-art/44025

A Scholar in his Study, c.1833
This watercolour is a coloured sketch for the subject engraved in 1833.
The model appears to have been Cotman’s eldest son, Miles Edmund, who was twenty-one in 1831, and worked alongside his father in the Cotman studio.
It is the key image of a series of subjects from the 1830s exploring scholarly immersion in books and art and antiques; the haven that he tried to create in his Norwich home.
Collection Professor David Hill
See previous article in SublimeSites.co:
https://sublimesites.co/2018/01/18/john-sell-cotman-a-harbour-for-the-soul-1/