This is the first of a series of articles in which I introduce a recently-discovered progress proof of the mezzotint titled ‘A Summerland’ made by David Lucas for John Constable in 1829. Here I discuss finding and identifying the new work, and in subsequent parts will explore Constable’s development of the subject, the specific development of the mezzotint and the significance of the subject in Constable’s wider artistic achievement. 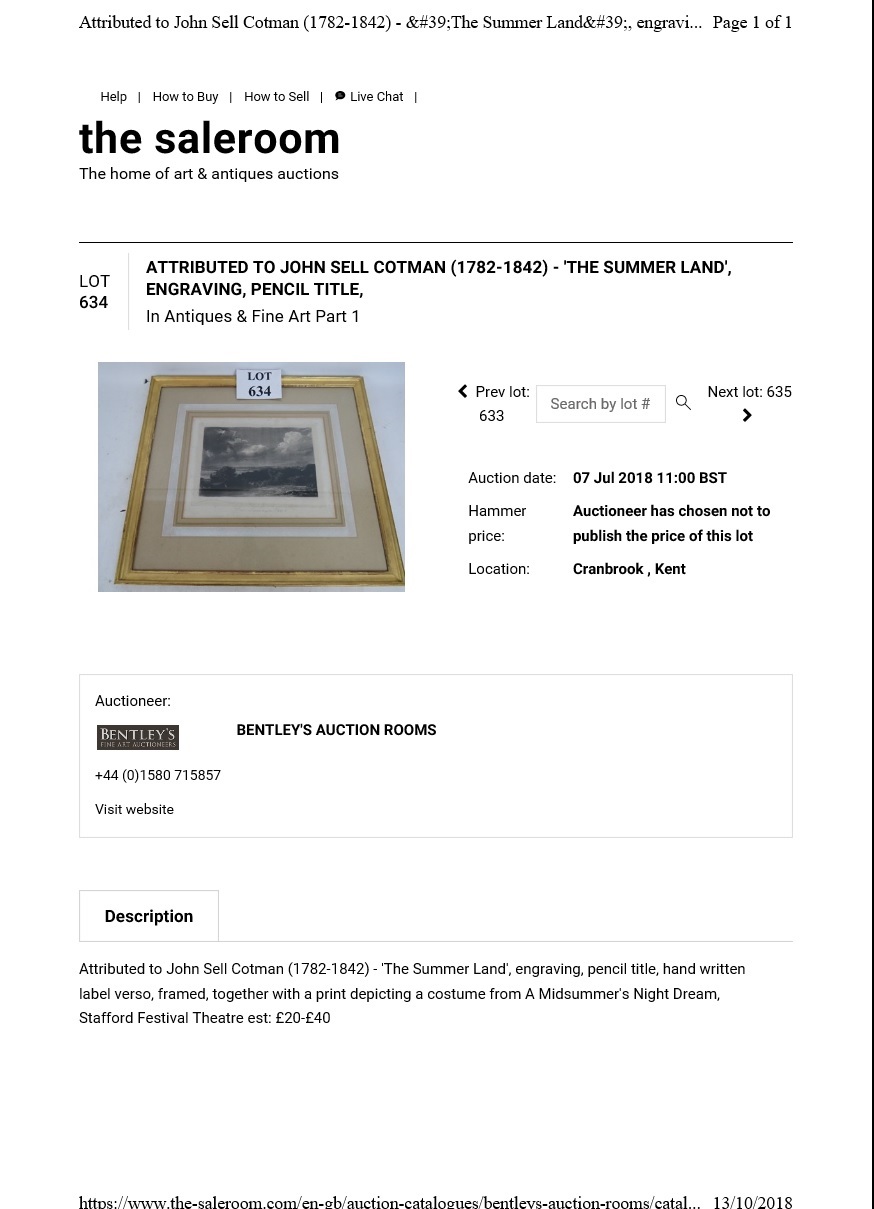 The auctioneer appears to have been guided by a label affixed to the back, which reads: ‘Classical Cotman. Frame & mount wash and gold leaf line. 11 x 8 1/2 in opening sight. 3 ins top and sides, 3 1/2 in bottom. Present from Alan Reynolds. Framed by Savage, March 1957.’ 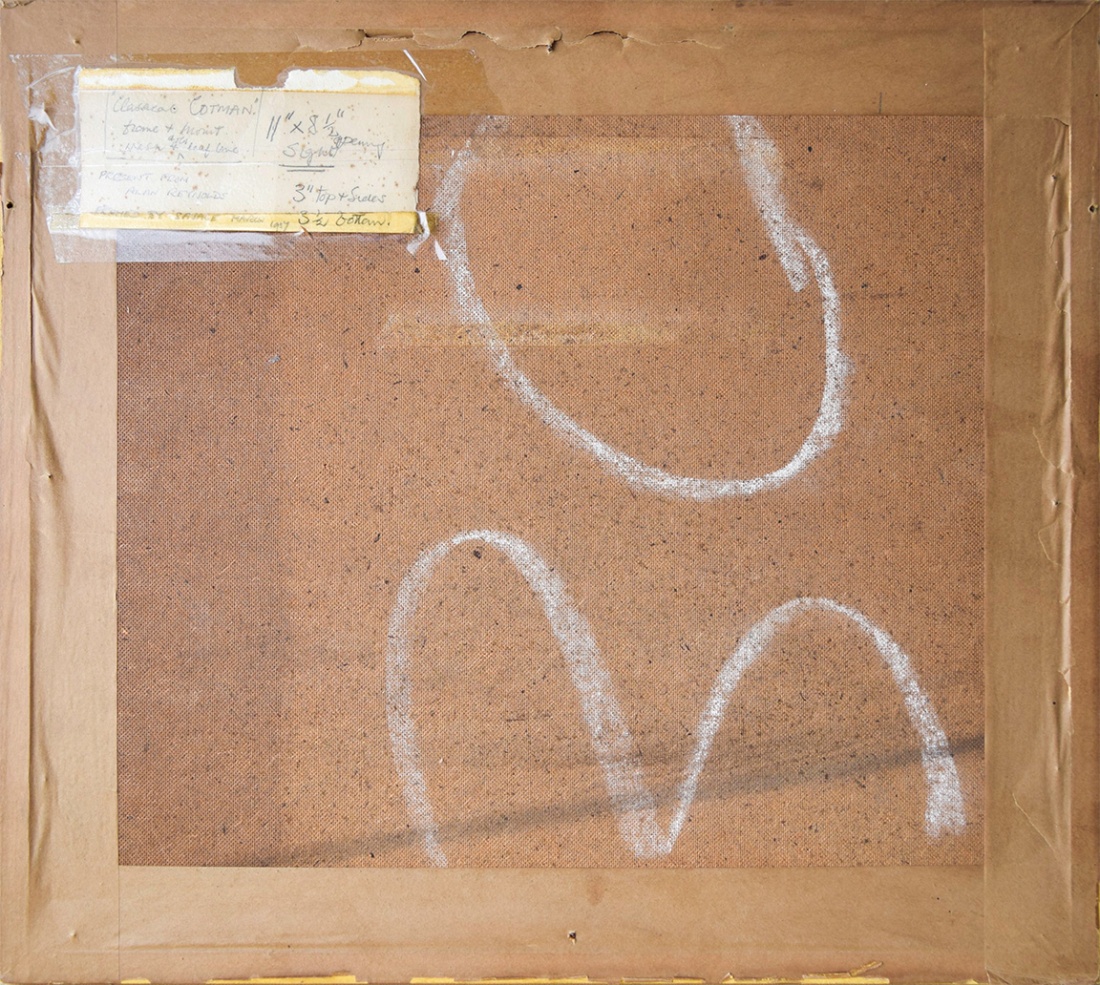 The print is, rather, a progress proof before letters of a mezzotint made by David Lucas for John Constable’s series of ‘English Landscape Scenery’. The project was begun in the later summer of 1829 and ‘The Summerland’ was among the first subjects to be commenced. The completed series comprised of twenty-two mezzotints of paintings by Constable made by Lucas under Constable’s close aesthetic and artistic supervision. The core set may be taken to be original works by Constable, personally directing the hand of the engraver as his amanuensis.

I wrote about the series in my book ‘Constable’s English Landscape Scenery’ published by John Murray in 1985. At that time my over-riding concern was with Constable’s process of self-identification through his art. I must confess that I was less interested in the detailed evolution of the individual mezzotints. The discovery of this proof, however, has newly focused me upon that aspect, as well as made me to think again about the way in which this subject reflects the broader and deeper issues in his art.

The standard study of the ‘English Landscape’ project is Hon Andrew Shirley’s, ‘The Published Mezzotints of David Lucas after John Constable’, Oxford, 1930. This sets in context the relationship between Lucas and Constable, gives the full correspondence between them and compiles an as-yet unsurpassed listing of the progress proofs of each plate. Working again with this splendid treasure of scholarship has been a pleasure in itself.

I have also had occasion to revisit R B Beckett’s extraordinary volumes of ‘John Constable’s Correspondence’. The fourth volume annotates the full correspondence between Constable and Lucas with a meticulous commentary and chronology of the series. When I read Beckett’s volumes when working towards the publication of my own book, they struck me as containing some of the finest, most immersive scholarship I had ever encountered. They have been a constant recourse throughout my teaching career, and I have routinely encouraged students to loose themselves in its mazes. It is a delight to be able to purposefully re-immerse myself in them.

The first that we hear of ‘The Summerland’ in particular is in a letter dated 26 December 1829, in which Constable requests four proofs.

One exceptional feature of this subject is how much trouble Constable took over the sky. Shirley says that early in the development of the image Constable made Lucas reground and rework the sky. In his list, the first impression with the new sky is his state 10c, a copy of which is at the Fitzwilliam Museum (P.1382-R). This appears to be almost identical with the recently-discovered example, except for the signature, bottom right. This is the first state in which it can be read distinctly as ‘1829/ D Lucas’.

There are also two very similar impressions at the V&A (E821/822.2016) and another at the Metropolitan Museum, New York (39.68.13). These differ from the Fitzwilliam impression (p.1382-R) in having a more distinct signature and date at the bottom left. This appears more distinctly in the recently discovered example, but that may be only because the others were more densely inked. After the ink was applied, the plate had to be especially well wiped for the finest highlights to print cleanly.

The V&A’s online catalogue of their ‘English landscape’ proofs suggests that it would be worth making a thorough collation of all the known proofs. The present subject continued to evolve the sky through several further stages, and I have attempted a collation of all the states that I have been able to identify. This follows below, and is complete as I can make it at this stage. Further impressions might very well present themselves for consideration.

The title inscription appears to be by Constable himself. There are several letters from the period that survive, and some, discussing the project with Lucas and others, in which he has written exactly the same phrase. The majority are at the Fitzwilliam Museum where there are about twenty instances of Constable writing ‘Summerland’. Comparison shows that Constable was remarkably consistent in the way that he wrote the word. There is almost always a slight separation of the two ‘m’s and anther between ‘Summer’ and ‘land’, even when the ‘l’ of land is lower case. Across the instances the treatment of ‘Summerlan’ is completely consistent with the title here. The only variation is in the final ‘d’, which, whilst of the same general form, usually has a final horizontal flourish to the right. There are two instances in the correspondence, however, where it is identical to that here – in letters of ?summer 1830 (Shirley number 23; Beckett p.334) and 7 October 1832 (Shirley 120; Beckett pp. 382-3). Altogether, and especially given the orthographic idiosyncrasies, the comparison appears convincing. If the identification be sustained this impression would appear exceptional amongst progress states from the ‘English Landscape’ project.

The inscription on the label ‘Framed by Savage’s’ probably refers to Savage’s Fine Art of Northampton. The last retail gallery closed in 1995, but the business was continued privately (at least up to 2010) by Michael Savage. The 1950s were probably the firm’s heyday, when they ran a fine framing and restoration business, together with a successful art gallery and dealership.

The Alan Reynolds in question is possibly the artist of that name (1926-2014). He painted Sutherland-esque landscapes and Nicholson-esque abstracts, hailed from Suffolk, and has work represented in most major collections of modern British Art. It would be interesting to discover to whom he gave the print as a present.

2 thoughts on “John Constable, David Lucas and ‘A Summerland’: Part #1”