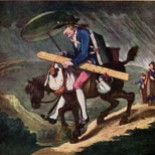 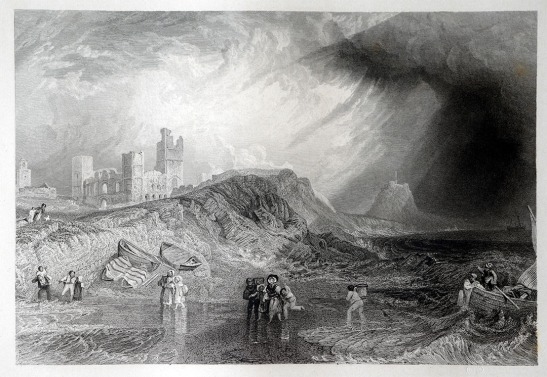 W. Tombleson after J.M.W.Turner R.A.
Holy Island, Northumberland, 1832
Etching and engraving, image 166 x 245, on plate 251 x 300, printed in black ink on india paper, 239 x 291, bonded to backing sheet of heavyweight white wove paper, not watermarked 399 x 562 mm
Proof before letters, as per Rawlinson’s first published state; one of the few subjects to have no inscription in its first published proof state. ‘JMWT’ monogram blind stamp (good impression) towards lower right edge of image. This mark was applied to every item sold from Turner’s studio in the sales at Christie’s of 1873 and 1874.
Proof impression and first published state of plate issued 1832 as plate 35 of ‘Picturesque Views in England and Wales’ Part 9, no.3.
Private Collection

This is the second instalment of a new series of articles in which I will revisit each of the 96 sites depicted by J.M.W.Turner in his series of engravings ‘Picturesque View in England and Wales’. These were published over a period of ten years between 1827 and 1837 but represent subjects drawn from his entire career. Overall the scope of the series is epic and sublime. It teems with imagery and detail, human comedy and drama, history, and the accumulated knowledge of every effect and experience that a lifetime of being in the world might witness. It is positively Miltonic in scope, breadth and power, and luminous in its sympathy for the human condition. It is also represents the very summit of the art of engraving and printing by hand, just at the point where the production of images was about to be overtaken by photography and industrial publication. The order in which I tackle the subjects will perforce be dictated by opportunity and circumstance. For the time being I will concentrate on Northumberland subjects. Here we consider Turner’s image of Holy Island, Northumberland, the most northerly subject of the England and Wales series.

The subject is one of those included in the current exhibition of Turner: Northern Exposure currently showing at the Granary Gallery, Berwick-upon-Tweed, until Sunday 13 October [see https://www.turnernorthernexposure.co.uk/%5D. This is a small, but exquisite display of subjects related to Turner’s first tour to the north of England in 1797. In it, we argue that this tour was the key formative event of his early career: His exposure to the scenery and weather of the north opened up to him the poetic power of the landscape sublime. From that time he returned to subjects sketched then at regular intervals throughout his career. The exhibition moves on to Carlisle in the autumn, and then to Harrogate in the spring of 2020, at each venue with a fresh focus on the area relevant to the venue. I hope to feature a few more subjects relating to each area as the exhibition develops. 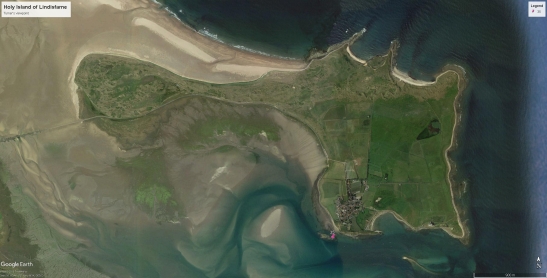 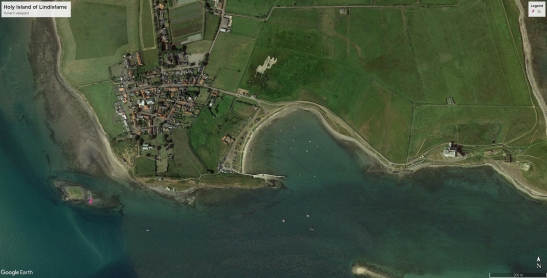 The present subject is the view of Lindisfarne church, abbey and castle as seen from the tiny St Cuthbert’s Isle off the south-west tip of the island. The island can only be accessed on foot at low tide, and only a relatively small proportion of visitors ever bother to make the crossing. 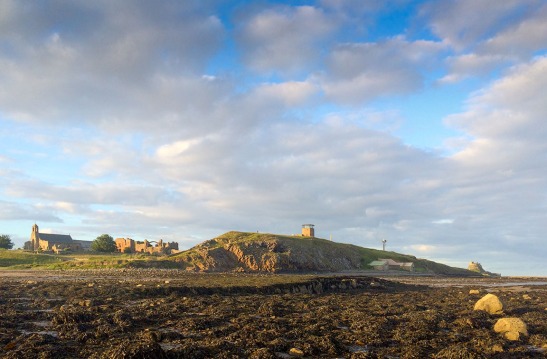 Turner’s only sketches on Holy Island date from his tour of the north of England in 1797. At the age of twenty-two, he was principally interested in developing his reputation for architectural subjects, and so devoted the majority of his time to five excellently detailed sketches of the interior of Lindisfarne Priory. His sketch of the present subject, however precedes those and must record his first impression, immediately on arrival.

Holy Island, Northumberland, 1797
Pencil on paper, 210 x 270 mm
A page from the ‘North of England’ sketchbook, Tate, London, Turner Bequest, TB XXXIV 51, Tate D00959
To see this in Tate’s online catalogue of the Turner Bequest click here, and use you browser’s back button to return to this page
https://www.tate.org.uk/art/artworks/turner-holy-island-general-view-from-the-sea-d00959

It was the architectural subjects that Turner concentrated on for watercolours developed immediately after the visit, but when he thought about the island of Lindisfarne thirty years later for ‘Picturesque Views in England and Wales’, it was his arrival that he remembered. 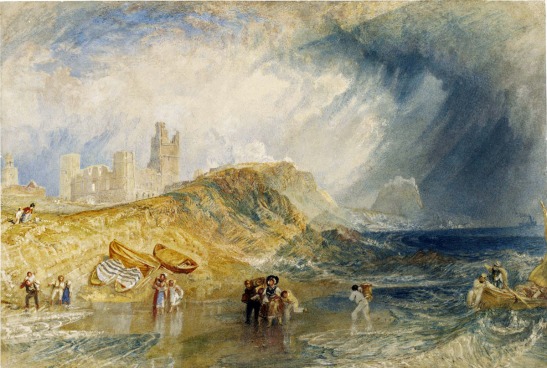 Holy Island is one of a considerable number of England and Wales subjects that Turner sketched on his first northern tour of 1797. It would appear that there remained for him deep, unfinished business with the observations made when his younger self first set out to seriously experience the wider world.

Turner’s engraved subjects are always worth examining closely for their figures. Turner’s sympathies were always drawn towards those whose lives exposed them most to the elements, and whose livings were dependent on their knowledge and understanding of nature. Here a small boat has pulled up in the surf to the right, and passengers are enjoying something of a foot-wetting on the shore whilst goods are offloaded.

Turner is presumably recalling his own mode of arrival as a young man in 1797, when he came to Lindisfarne from Bamburgh. The most direct route would have been to take a ferry boat. The coast would have been teeming with boatmen offering such services. In Turner in the North (Yale University Press, 1996) I wrote: ‘A ferry-boat has just landed in the teeth of a fierce squall, and passengers paddle to the shore, no doubt relieved. A gales has whipped up, and one of the boatmen has to hold on to the boat to prevent it drifting away. One cannot image much enthusiasm for the return crossing. More cautious boatmen have sheeted their boats on the beach.’ 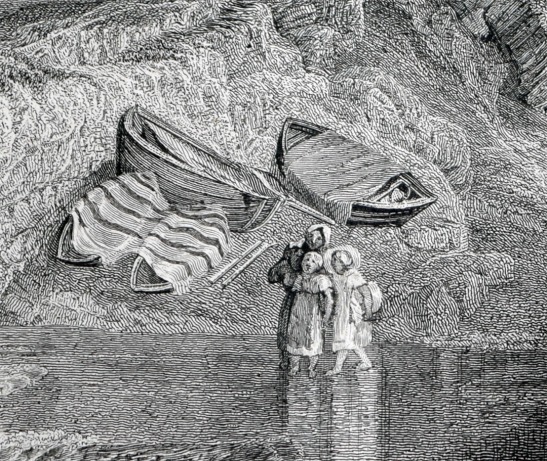 Most modern visitors give little thought to Lindisfarne’s maritime identity. The contemporary access is by car over the causeway to the north-western part of the island. The sands crossing was always a route for pilgrims on foot or carters leading horses, but it must be obvious that there is very little at either end of the causeway – nothing at all at the Lindisfarne side, which suggest that this route was always something of a detour. The castle guards the main boat landing; the village and abbey cluster at the most sheltered access to the sea, and the principal historical route of communication was always from the royal castle of Bamburgh to the south. 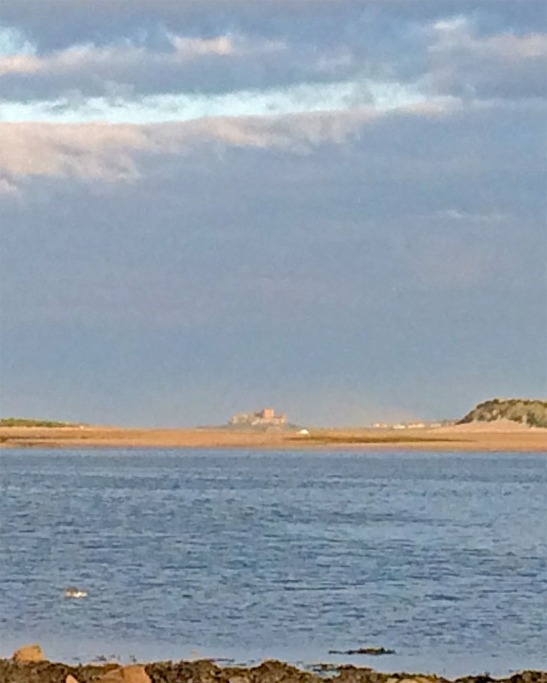 Nowadays the visitor might be little aware of Lindisfarne’s essentially maritime character, unless one wonders why the settlement was founded at the south-west tip of the island. The contemporary frisson of excitement of a visit to Lindisfarne is the driving over the causeway. This is a relatively recent adventure for the motorist, since the tarmac roadway was built only in 1954. Before then the route was best left to tractors and horse-drawn carts. Pedestrian visitors can still enjoy the original experience by following the poles marking the pilgrim’s way. Bare legs or waders are recommended; it is a soft and silty expedition, and best done only under the leadership of a guide. Generally today, the excitement is all too frequently about incautious tourists who ignore tide warnings, and end up with their cars awash. A contemporary Turner might well find a subject in such hubris. 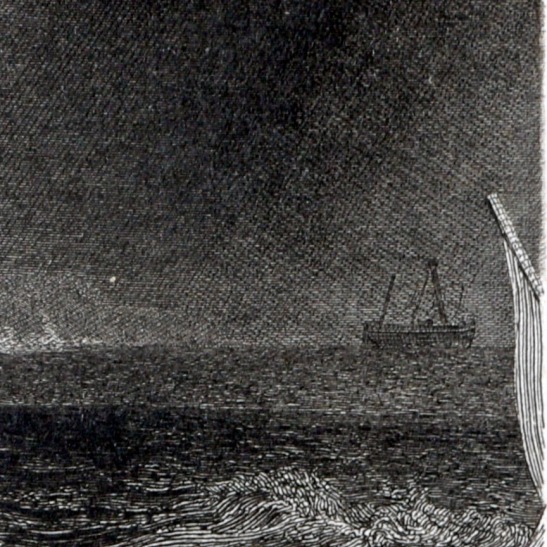 Revisiting the Holy Island of Turner’s England and Wales raises the issue of changing modes of access. And that, indeed, was one of the core themes for Turner. He remembers his own mode of approach in the foreground, but in the far distance introduces a detail specific to the date of the watercolour, a modern steamboat chugging along the horizon. Steam boats were unthought of in 1797. The first trials were made in the 1810s and regular North Sea coastal services were established in the early 1820s. The great advantage of steam was that ships could make progress almost no matter whatever was the state of the winds. This ship ploughs its way south into a southerly squall, decidedly poor conditions for a journey in a small open boat. The detail is a measure of how much things had changed in the thirty years between the sketch and the engraving, but also of how much [as represented by the foreground] remained the same. It is perhaps worth reminding ourselves than when the steamship Forfarshire famously ran onto the Farne rocks in 1838, it was in a rowing boat that Grace Darling set out to the rescue. Come to think of it, that might easily be the Forfarshire passing here! 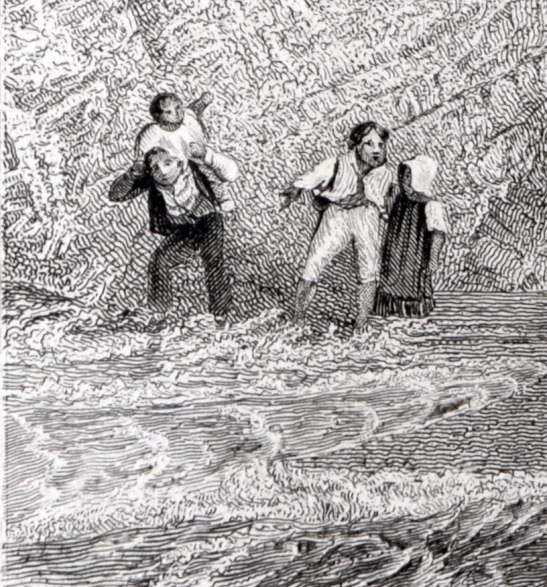 Apart from that, it is striking how many of the figures here are children. One wonders whether they perhaps went to school on the mainland? The time of day is morning, with the sun slanting in from the east, so they might all be setting out. Certainly it looks as if the boatman is beckoning them aboard, and none of the putative passengers are at all enthusiastic to respond. Turner seems to be suggesting something of the educative character of his own journey of 1797, and that real knowledge of nature is only drawn from thorough immersion in it. 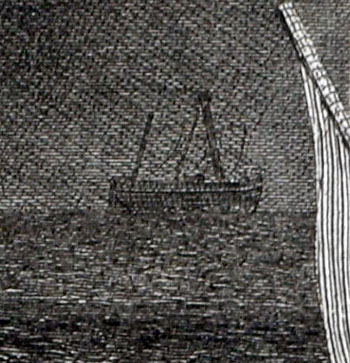