On 27 June 2019, lot 372 Chiswick Auctions, London offered a progress proof of David Lucas’s mezzotint of Constable’s ‘A Summerland’. The catalogue identified this as proof state 10e as given in Andrew Shirley’s superb book Mezzotints by David Lucas after John Constable, published in 1930.. This turns out to be wrong. It is, rather, to be identified with an impression at the Fitzwilliam Museum, Cambridge, P139.1954, which I numbered as one of the many variants of Shirley’s state d (v) listed in the article ‘John Constable, David Lucas and ‘A Summerland’: Part #3 – The Progress Proofs [d]‘, which first appeared on 22 October 2018. I have now updated the original article to include reference to this new example.

At the time of original publication I had not received permission to reproduce the superb sequence of proofs at the Fitzwilliam Museum, Cambridge. This was kindly granted some time ago, so I have taken this occasion to add images to the Fitzwilliam references throughout the whole series of articles. 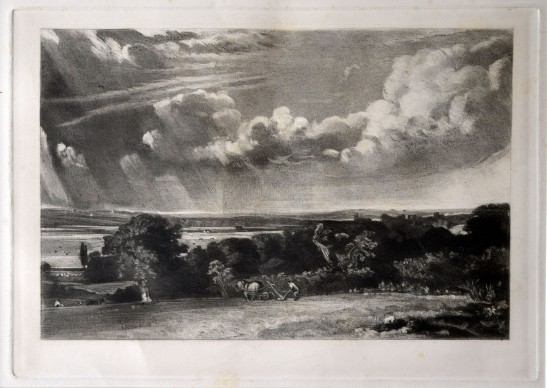 The Chiswick auctions lot turned out to be more interesting than I had originally suspected. It included another ‘Summerland’ print, described as ‘a copy of the published state’, together with an impression of a different ‘English Landscape Scenery’ subject,